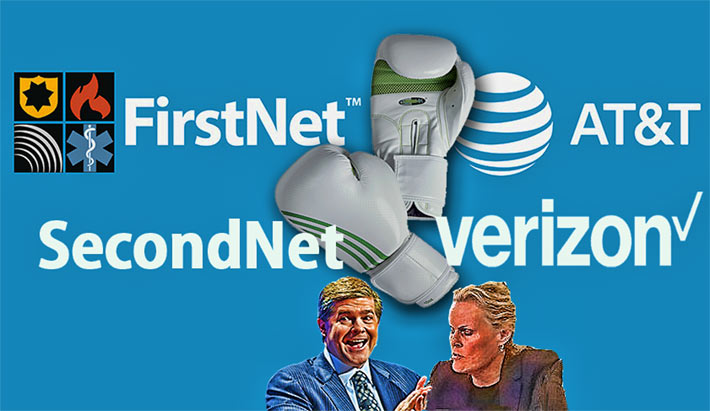 FirstNet Chairwoman Sue Swenson has informed Congress over the years that the broadband network for first responders will be successful if the private sector gets on board and supports it. Verizon Wireless EVP and President of Global Operations John Stratton today announced the company’s planned private first responder network. Ideally, FirstNet would like to see all states and territories opt-in to its network delivered by AT&T.

Verizon Wireless, the largest wireless network operator in the U.S. announced today that it going to build and operate its own private network core to serve first responders, jumping into the ring with AT&T who has the contract to build out the opt-in FirstNet network.

SVP, Public Sector for Verizon Mike Maiorana discussed the carrier’s commitment to public safety communications in an interview with IWCE’s Urgent Communications on Monday, stating that they would be “competitive with whatever AT&T puts out there in its final [FirstNet] offering,” but Verizon Wireless EVP and President of Global Operations John Stratton provided the details.

Verizon said they will make substantial investments in new network capabilities, as well as expanded products and services, to enhance their industry-leading 4G LTE network for public safety.

Verizon said it is responding to requests from public safety agencies and will:

“We stand with the public safety officials that keep our cities, communities and neighborhoods safe,” said Stratton.

“Support for public safety is in our company’s DNA and our commitment to them never waivers.”

They said they will also make available multi-band devices that will provide access to Band 14 spectrum and enable full interoperability with any Band 14 radio access networks (RANs) deployed by FirstNet.

“We’re making the investments necessary to give public safety access to the best possible network coverage, reliability and capability, when and where they need it,” said Maiorana.

“Our public safety network will provide a comprehensive and cost-effective solution for public safety, and we’ll continue working to offer first responders the network reliability and access to innovative services they need to keep our communities safe.”

Maiorana said that Verizon did not bid on the FirstNet RFP because it was structured as a spectrum buy.

“We were not interested in commercializing FirstNet’s spectrum and we didn’t need extra network spectrum to build out our nationwide network.”

Yesterday, Kansas became the 14th state and territory to agree to use FirstNet’s service.

Rivada Networks, which protested the award to AT&T, is also responding to states that issue RFPs seeking vendors willing to build and maintain a statewide public safety network that would be interoperable with FirstNet.