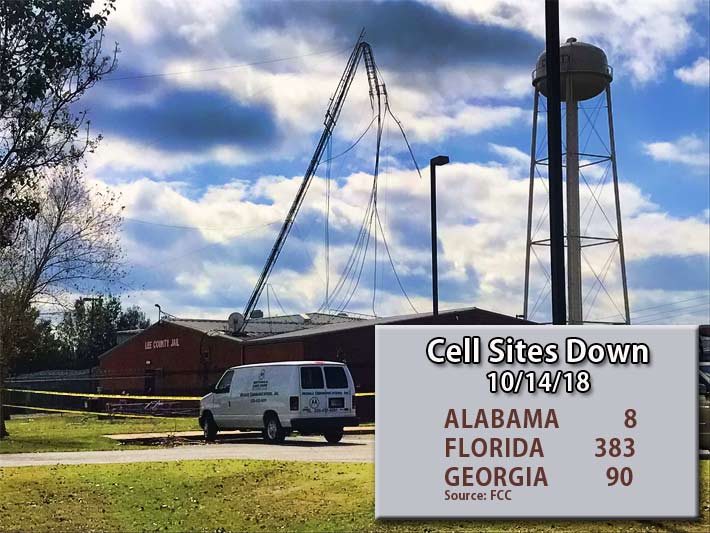 Lee County in Georgia had an 88% cell site recovery rate from Oct. 11 through Oct. 14, cutting sites out of service from 25 to just 3. However, the FCC’s reporting system doesn’t capture the number of towers down in each county such as this tower failure at the Lee County Jail. (View county-by-county cell site outages below)

Florida Governor Rick Scott at a press conference yesterday regarding Hurricane Michael restoration efforts said, “One of the most frustrating problems is telecommunications.”

“Now, after clearing the roads, communications are the first priority, and power. We have an unbelievable problem in Bay County — Verizon is down and AT&T is up, but the county services are on Verizon. In other places, Verizon is up and AT&T is down,” said Scott.

Spinning their service reliability, hours later, Verizon said in a press statement that 97% of their network was in service in Florida.

However, they also stated that the storm caused unprecedented damage to their fiber in Panama City, Panama City Beach, and surrounding areas in Bay County. It is expected that carriers will continue to see fiber outages, especially in Mexico Beach, as heavy equipment continues to remove storm damage debris, resulting in additional fiber cuts.

Bay County still has 216 cell sites out of service, representing 66% of the county’s 327 sites. (See county-by-county outage reports below.)

Since Thursday, 2,000 cell site communications workers have arrived to rebuild the damaged and destroyed infrastructure along with 17,000 utility and 18,000 search-and-rescue personnel, according to FEMA.

They joined 4,000 Florida National Guard troops and thousands of police and firefighters.

Scott said he is urging carriers to speed up their repairs, including deploying state police to escort workers’ crews through the increasingly clogged traffic on roads that have been blocked by downed trees, utility poles and other debris.