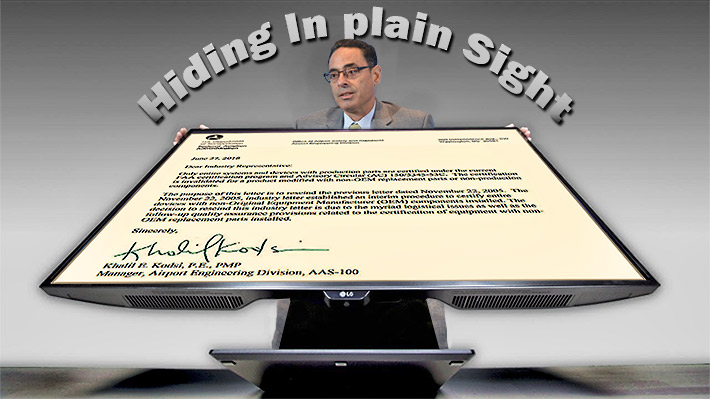 Although the FAA said that it notified manufacturers after publishing its non-OEM parts directive on June 27, 2018, four manufacturers noted that they were not aware of its existence until one of their clients contacted them. Khalil E. Kodsi, FAA Manager, Airport Engineering Division, said that the primary reason for the policy adjustment is because the non-OEM certification procedure was “too difficult for us to manage”.

In an unrelated Google search on Aug. 6, 2018, a lighting contractor found an FAA document with a somewhat ambiguous two-paragraph directive regarding non-original equipment manufacturers’ (OEM) lighting system components that was published on June 27, 2018. It quickly spread throughout the obstruction lighting community because the industry wasn’t aware of it, and tower owners were asking their obstruction lighting suppliers and Wireless Estimator for information. 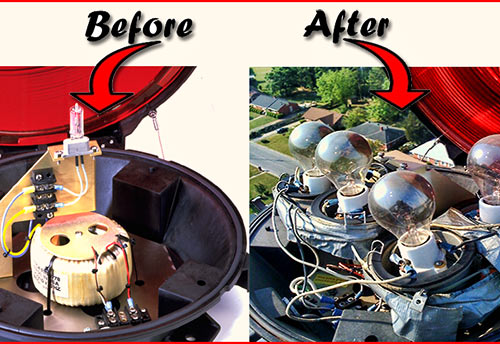 Although this retrofitting rat’s nest that was cobbled together to silence an alarm is an extreme example, OEMs believe that using non-certified parts could be a threat to aviation safety

After a detailed review in early August by four lighting system manufacturers and a discussion with the directive’s author, Khalil E. Kodsi, FAA Manager, Airport Engineering Division, the history of component concerns and the rationale of the rescinding order became known, but confusing as to why it was necessary, and why manufacturers weren’t consulted prior to or following its publication.

The letter also spotlighted a failed FAA non-OEM components policy and a tower obstruction lighting network that may have up to 20,000 or more structures that are not in compliance with FAA regulations.

The CliffsNotes for the confusion and industry-wide concern:
For a tower or any other FAA obstruction/airport lighting system to be issued a certificate of conformance, lighting manufacturers are required to have their systems tested and approved through an extensive and costly certification program managed by the FAA’s third-party certifier, Intertek Testing Services (formerly ETL Testing Laboratories).

On June 8, 2004, following information brought forward through lobbying efforts by OEMs, the FAA said it was concerned that non-OEM components were used for replacement parts in lighting systems, and the structures’ owners were reminded in a policy notice that their system would no longer be compliant with FAA specifications of FCC regulations.

On Nov. 4, 2004, after being petitioned by aftermarket manufacturers, the FAA requested public comments for certification of non-OEM replacement components. The agency said that while it was considering a permanent change – ‘effective immediately’ — a manufacturer could have its replacement parts certified if Intertek tested them and they met compliance.

However, the FAA made it clear that the non-OEM components would have to be tested individually in every manufacturer’s unit. As an example, if a flash tube was marketed as a replacement for a TWR Lighting, Unimar, Flash Technology or any other OEM’s component, the aftermarket provider would have to show that their lamping product was tested in the manufacturer’s unit and certified for the complete system.

On June 27, 2018, the agency rescinded the Nov. 22, 2005 policy, with the first paragraph stating: “Only entire systems and devices with production parts are certified under the current FAA certification program and Advisory Circular (AC) 150/5345-53C. The certification is invalidated for a product modified with non-OEM replacement parts or non-production components.”

That statement further muddies the invalidation message and might invalidate the June directive, according to Wireless Estimator, because (AC) 150/5345-53C is not the ‘current’ advisory circular since it was canceled in 2012 and was replaced by (AC) 150/5345-53D.

FAA’s decision information is less than illuminating
Kodsi informed Wireless Estimator in an interview on Aug. 8, 2018, that the primary reason for the policy adjustment is because the non-OEM procedure was “too difficult for us to manage”.

The notice said it was “due to the myriad logistical issues as well as the follow-up quality assurance provisions related to the certification of equipment with non-OEM replacement parts installed.”

It’s unclear as to why an interim policy that was good for almost 14 years was suddenly unmanageable by a third party vendor, especially since aftermarket manufacturers weren’t beating down Intertek’s doors to have their components system-specific certified.

The FAA’s current list of certified manufacturers doesn’t list one component manufacturer that has its part certified as an approved replacement for an OEM’s system.

Over 20,000 or more lighting systems are non-compliant
Kodsi said that rescinding the June 2005 interim policy “doesn’t change anything”. It does since it will no longer allow non-OEM component manufacturers to get their parts certified for an OEM’s system, a benefit they’ve had for the past 13 years, even if it appears that they didn’t take advantage of the procedure that might cost them $8,000 to $10,000 to certify each manufacturer’s unit.

The FAA letter said the agency was concerned because it could not provide the “follow-up quality assurance provisions related to the certification of equipment with non-OEM replacement parts installed,” but the more troubling issue, according to lighting executives, is the thousands of towers that are not in compliance.

Although the FAA has publicly stated that compliance solely rests with the tower owner, one lighting manufacturer representative questioned: “Does it matter who’s at fault when a system fails due to faulty non-compliant parts and an aircraft hits a tower?”

In 2004, the FAA said that strobe light manufacturers reported that at least 8,000 towers of the country’s 44,375 tower that are lamped have untested and unverified lights in current operation.

Today, three manufacturers informed Wireless Estimator that the total could exceed 20,000 or more since in the last 14 years there are at least 12,00 to 15,000 or more structures that have non-compliant parts, from flash tubes, circuit boards, and capacitors to cable.

“The FAA  invalidating the certification of lighting systems with non-OEM components isn’t new and has been their policy forever. It isn’t going to add to the number of faulty units out there. Continued use of unacceptable replacement parts will. They’ve known about this problem for 13 years and all of a sudden they realized that they dropped the ball and never developed a permanent structure for non-OEM parts substitution,” said a lighting maintenance company owner, who wished to remain unnamed, as did others quoted by Wireless Estimator.

FAA’s silence is troubling for some
The FAA said that it had sent out letters to manufacturers and other stakeholders on their mailing list to inform them of the new directive, however, three of the industry’s largest manufacturers said they weren’t aware of it until early August when emails regarding the letter started arriving.

One lighting manufacturing executive said he was concerned that the FAA made such a severe action without any industry input.

Another obstruction lighting executive said that he too didn’t receive notification from the FAA, and he assured Wireless Estimator that his company didn’t lobby for the new policy.

“We didn’t know anything about this until last week. It’s almost as if they wanted to hide it,” he said, a common thread voiced by other manufacturers who didn’t want the industry to think they were behind the new directive that will increase sales for their high-ticket replacement components or systems.

“It’s possible that the airfield side of the lighting community pushed this through,” said an aftermarket manufacturer’s representative.

At an FAA Office of Airport Safety and Standards presentation in Washington at the Spring IESLAC meeting on May 8, two Airport Engineering Division staffers discussed obstruction lighting equipment and new advisory circulars, but did not mention the rescinding order of non-OEM parts certification that would become effective the following month.

Aftermarket manufacturer identifies problems/ambiguity of certification compliance
Two aftermarket component manufacturers also questioned why the FAA after 13 years decided to cry uncle when the agency was most likely aware – through comments provided by industry stakeholders – that a non-OEM compliance procedure was too difficult to manage when it was initially explored.

One executive told Wireless Estimator that if they were going to introduce numerous non-OEM parts for another manufacturer’s system such as a capacitor, relay and flash tube, each item had to be independently tested, then tested with the second component and again with the third part. Then all three had to be tested together as a unit.

He said it became unwieldy and impractical, and although they received acceptable test results from Intertek they didn’t move forward with getting a certificate of compliance.

Had they, he agreed, their product would have been listed in Intertek’s certified systems and non-OEM components.

He pointed out the ambiguity of somef FAA documents that are not affected by the June 27, 2018 rescinding order such as in  Advisory Circular 70/7460-1L CHG1 regarding certification program compliance that states: “Other manufacturers’ equipment may be used provided the equipment meets the specification requirements of AC 150/5345-43.”

The manufacturer said he doesn’t agree with the FAA’s frequent use of the term ‘non-OEM’ parts.

“If anything, they should say that you must use parts that were originally certified in the system,” he said.

The rescinding order could have a serious impact upon some aftermarket manufacturers, but at least two of those companies also manufacture lighting systems, and they could possibly benefit from the non-OEM parts retraction since OEM replacement parts are higher priced.

Checking compliance could be complicated
Two manufacturers’ representatives said that according to the rescinding letter and the fact that no aftermarket component makers have had any of the lighting systems certified with their component, its likely that any system that has any non-OEM parts is not certified.

In the event of a light failure, tower owners are required by the FAA to maintain a record of the date, time and nature of adjustments, repairs, or replacements made.

However, the agency doesn’t identify that it’s necessary to detail the manufacturer of the replacement part. And often the owner doesn’t know what is being used since some maintenance companies will repurpose whatever spare parts they have in their vehicle if it will silence an alarm.

LED technology is providing a self-policing change
Tower owners have been upgrading their obstruction lighting systems from Xenon to LED due to the LED system’s superior service benefits and reduced energy costs. The exchange is currently between 30% to 50% complete, according to an estimate provided by four manufacturers.

The rest of the systems are expected to be changed out over coming years due to attrition.

With all new LED units, the non-OEM concern has been considerably reduced, but if non-OEM parts are introduced in the industry for LED systems, it could again climb.

The FCC is the enforcement arm of the FAA for obstruction lighting and marking compliance, but industry observers cannot recall if a Notice of Apparent Liability was ever issued by the agency for a system that contained non-OEM parts.

“I think we would have heard about it if one was issued because we would have promoted it like crazy to tower owners to ensure that only our parts should be used if they have one of our units,” a lighting manufacturing sales representative said.