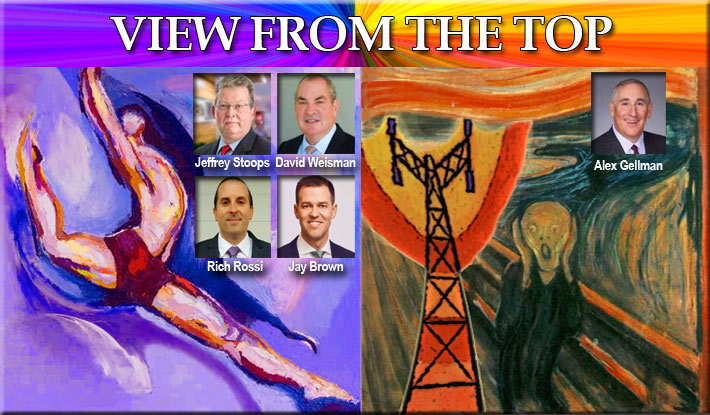 Executives from American Tower Corp. (Rich Rossi), SBA Communications (Jeffrey Stoops), Crown Castle (Jay Brown) and InSite Wireless (David Weisman) danced around the possibility that if there is a Sprint-T-Mobile merger that it might have an effect upon future earnings. They agreed with four thumbs up that it would be beneficial to the industry.  Vertical Bridge CEO Alex Gellman disagreed.

If the marriage of Sprint and T-Mobile is approved by regulators, the majority opinion of towerco executives at Connect (X) in Charlotte, N.C. last week was that business would still be robust.

Jay Brown, President and CEO of Crown Castle, said during the View From the Top presentation, “It will almost be irrelevant how many carriers we have.”

He said that carrier capex is driven by mobile customers’ usage of data which he believes will rise considerably.

Although he pointed out that 20 years ago Crown Castle had 1.2 tenants per macro tower and now has 2.5, he didn’t thread how the merger would be beneficial.

Crown Castle said in April that T-Mobile and Sprint represented approximately 19% and 14%, respectively, of revenue.

During a May 1 American Tower Q1 conference call, CEO James Taiclet said, should the transaction proceed, although there may ultimately be less total tower sites in the merged network, “each site is likely to have more spectrum bands, more data traffic and more equipment installed, which would result in offsetting amendment benefits.”

However, Vertical Bridge CEO Alex Gellman said although he was long-term bullish, the merger could cause some short-term pain with the decommissioning of sites.

In April, Sprint and T-Mobile said that if the merger is approved they will be decommissioning 35,000 macro towers – most of them likely to be Sprint sites – and would only add 10,000 new towers in the coming years as well as approximately 50,000 new small cells.

The regulatory hurdles for merger approval could take up to 18 months, but a number of analysts believe that both carriers will be spending a combined $10 billion in the meantime to bolster their networks.

Vertical Bridge evolving as the ‘un-towerco’
Since Vertical Bridge isn’t a publicly-traded REIT such as Crown, American and SBA, it doesn’t have to craft every comment with a positive spin in order to please shareholders.

Its marketing campaign is also unique as it attacks some traditional revenue resources.

In a full-page ad in the Connect (X) program guide, Vertical Bridge promoted itself as a T-Mobile-like un-towerco, stating that it doesn’t charge application fees, admin fees or swap fees on like-for-like equipment. And it doesn’t mandate use of its in-house services or charge frequency-based rent.