Every large tower owner dreams of the day when they can boast that they’re the largest in the world. Those hopes were dashed yesterday with the announcement that the big three telecommunications operators in 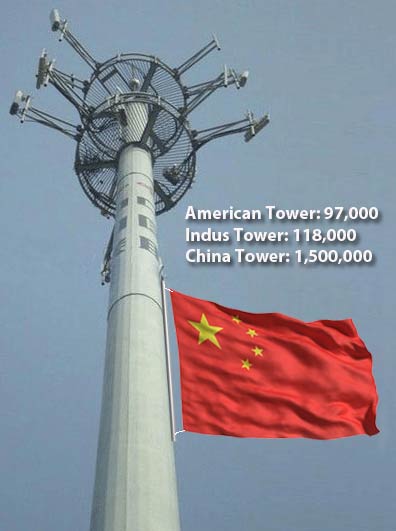 According to Barclays, the total tower count will be a staggering 1.5 million towers. The asset worth of the new company: $34 billion, putting each tower at an average value of $22,000.

The next largest tower owner is American Tower Corp. with 97,000 towers in 13 countries.

Barclay’s total tower count isn’t verifiable since none of the three operators, China Mobile, Unicom, and China Communications do not publish the number of structures they own. Analysts’ counts have varied, but it is within the million range.

O’Rielly’s statement, however, appears to have little credibility since he was quoting a stock analyst without any verifiable industry track record.

China Reform Holding will infuse $1.4 billion in China Tower and receive a 6% stake. It is a subsidiary of the State-owned Assets Supervision and Administration Commission, an agency directly under the State Council.

The Chinese carriers are negotiating lease fees with China Tower, which are to be set on a “cost plus margin basis,” to allow the joint venture to cover its operating costs and earn a fair return, according to Bernstein Research senior analyst Chris Lane.

The mobile operators said the joint venture will enhance network coverage quality and save capital expenditure in constructing telecom towers,

“The completion of the long-awaited tower asset injection should help to level the competitive ground” for the smaller operators,” Cynthia Meng, an analyst at Jefferies Group LLC, wrote in a note Thursday. “However, due to the magnitude of the scale, we believe China Mobile will remain the dominant telecom market leader by far.”

The companies expect to complete the transaction on Oct. 31.