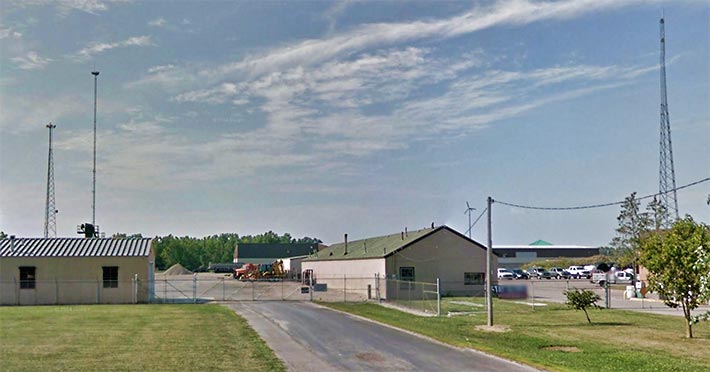 The 400′ guyed tower at left was reanalyzed under Revision G and failed, but village officials presumed that it meant the structure could possibly collapse and they blocked access to it and closed a road.

UPDATE: May 4, 2016 – Paulding, Ohio village officials have determined that a 400′ guyed tower is not a danger to the community after reviewing a second engineer’s report, and have opened Fairground Rd.

As suspected, the reported overloads were due to the fact that the newer ANSI/TIA-222-G standard includes more stringent ice requirements, compared to the 222-F standard which was used for the original tower design.

Paulding, Ohio officials, concerned about a 400′ county-owned tower’s engineered design being out of compliance with current code, blocked off a 400′ radius with flags around the guyed tower until a second engineer could identify whether it is unsafe.

Their safety concerns also required blocking off Fairground Rd. in the village of 3,600 residents.

Paulding Putnam Electric, who leases space on the tower, conducted a load study on the tower to identify whether it would support new equipment.

The structural engineering firm that completed the study using ANSI/TIA-222-G, said the tower does not comply with Revision G of the standard for the tower that was built in 2005, prior to Ohio adopting Revision G in 2008.

But county and village officials may have mistaken the engineer’s comments to mean the structure was not in compliance, not realizing that all towers built and designed under a previous code are still safe as long as they don’t go beyond the original scope of the tower loading.

“In this situation, the safety of the public outweighs the inconvenience to the folks that travel in this area. No one wants to believe this 400’ tower is going to fall over, but since officials have been put on notice of the engineer’s findings, we have to take a cautious approach.  Phone calls have already been made to get professionals here and provide further advice,” said Sheriff Jason K. Landers.

The tower is located on the county’s fairgrounds, adjacent to a 310′ Verizon self-supporting tower that was built in 2013 under Revision G.

The village has a number of other structures that were built prior to the adoption of Revision G.

The engineer who analyzed the county tower said that the tower failed Revision G’s ice loading and wind speed requirements.