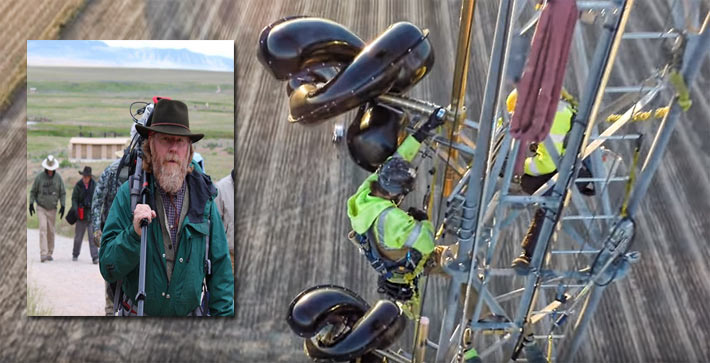 Todd Thorin’s ambition as a youth to get into filmmaking is paying off in a second career as he is frequently sought after to produce videos for the industry and other professions.

No matter how many times techs have climbed a tower, the view never ceases to thrill even the most jaded veteran. And when GoPro cameras first became popular and affordable around 2010 when the HD HERO was all the rage, YouTube exploded with dozens of climber videos.

Although they were of interest, their herky-jerky presentations pleased mostly the videographer and his family and friends.

However, long-time climber and safety professional Todd Thorin saw an opportunity to couple his knowledge of  video cameras, directing, graphics and drone capabilities to be able to produce what are acknowledged as being some of the best and most interesting video shorts in the industry.

In fact, so much so, that his two-minute video, 1500’ TV Tower (below), viewed at least 12 million times, will be screened during the New York City Drone Film Festival beginning March 5, 2016 at the Directors Guild of America Theater where it is a top contender from over 300 submissions from 54 countries.

Thorin, owner of Prairie Aerial, located in Sioux Falls, S.D., is Sioux Falls Tower and Communications’ director of safety and training, but his expanding client requests may eventually require his full time efforts.

As an example, Tangerine, a film that premiered at the 2015 Sundance Film Festival, was shot with an iPhone 5s with a $160 anamorphic adapter lens.

Another must see offering from Thorin’s numerous videos is Greenland (below), a relatively simple tower project that will have most climbers wishing that they could have been assigned to what appeared to be an adventurous assignment, even if cold weather isn’t their strong suit.

Thorin wasn’t on the Greenland jaunt, but pieced together GoPro videos and camera shots, and edited the interviews of two of the tower techs.

His editing ability to take vintage photos and couple them with interesting interviews and a vibrant soundtrack brings static presentations alive as seen in the 20th anniversary video he produced for the National Association of Towers Erectors.

Although his son Joseph is the accomplished pilot for the company that was founded in 2014, sometimes a shoot can have unintended consequences.

Thorin said that yesterday they were shooting a video of a cell tower for a customer in Des Moines, Iowa when they lost their signal with the drone due to heavy RF.

“It did what it was supposed to do, return after it lost its signal, but one of the propellers broke as it turned around to head home.”

It then fell from a height of about 80 feet and landed in a tree.

“I was surprised that there wasn’t that much damage, probably about $200 worth,” said Thorin, who was happy that the gimbal, the mechanism that holds the camera and stabilizes it in position, was not damaged, and they could continue with the shoot.

Thorin’s signature style can be seen in the opening of the National Association of Tower Erectors’ PPE inspection safety video that is part of their Climber Connection campaign.

For drone and camera aficionados, here are the specs
Although he will be adding new equipment shortly, Thorin currently uses a DJI Phantom 2 modified for higher performance with antigravity motors, which are more powerful than the stock motors, and balanced carbon-fiber props. It is controlled with a Futaba T8FGS transmitter for extended flexibility and functions. The crew has five batteries and two chargers for the Phantom to allow for a full day shoot.

The camera is a GoPro 3+Black also modified with a 5.4mm rectilinear flat lens with IR filter. They fly it with a 3-stop Polar-pro ND filter. The gimbal is a Zenmuse H3-3D. No counter-balance for the weight of the ND filter is employed. The camera records at 2.7k, 30 fps ProTune on. First person view is a 5.8Ghz SD system, with dual diversity 9-inch HD monitor.