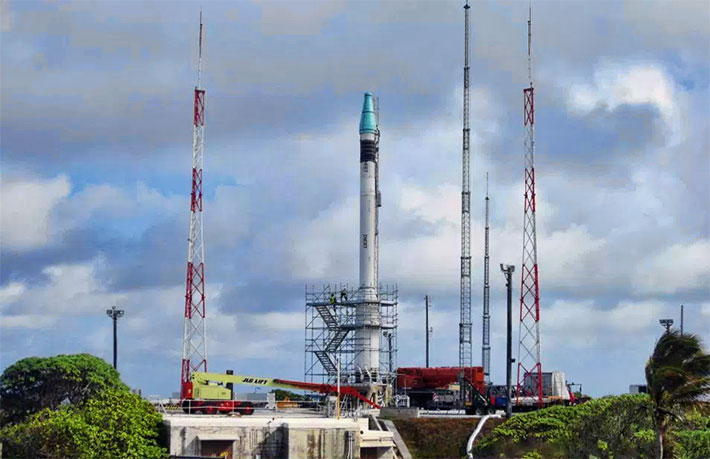 During the past week when you heard the words “missile defense,” it’s likely your first thoughts dwelled upon the widening concern by the U.S. over the development of a bevy of new missiles by the erratic North Korean regime of Kim Jong Un and the need for America and other countries to protect themselves from incoming missiles.

But there’s another important aspect of missile defense – protecting the missiles themselves from lightning strikes.

Mobile towers from Landa Mobile Systems were recently selected for that purpose by the United States Department of Defense Missile Defense Agency.

The Landa units were chosen for reliability, durability, and capability to hold up to the wind — rated to withstand up to a 105 mph wind speed in an unguyed deployment. They have operated without issues and are among the most reliable in the industry. Never in the history of the company has a Landa tower been blown over, the company reports.

The photo above shows the Model LMS106 HW as it is being utilized for lightning protection during a pathfinder mission last March.

Scott Robinson, MDA/TCT test engineer on the project, said, “The second one you see in the background is also an LMS106 HW. We emplace it near the transportation truck to protect the rocket stage until we stack it on the pad. Then we move it to its launch position so that we have two fixed and two portable towers in place to provide protection on all sides. The portable towers allow us freedom of movement around the pad for cranes and other rocket support systems until the rocket is stacked.”

The Landa towers provide lightning protection by intercepting a lightning strike that would otherwise hit the missile, and directing it safely to ground, in exactly the same way that a lightning rod protects a tall building.  The hot-dipped galvanized steel construction of the towers is one of the most commonly used materials for lightning protection systems.

The 106-foot maximum height LMS106 HW is one of eight models of mobile lattice towers that Landa manufactures.

Ranging in height from 65 to 150 feet tall, Landa’s towers are built to military standards to withstand extremes of heat, cold, salt, moisture and wind, and are EMP secure.  They also incorporate a patented key system which makes it possible to raise or lower the tower without external power, using only a cordless drill.

Landa also manufactures a single mast mobile tower solution, a complete line of crank-up mast systems with a maximum height of 72 feet.  These are mounted to Landa’s patent pending trailer design, and can be configured with a variety of options including a solar array and shelter.  The Landa crank-up mast systems were designed and built with military specifications, specifically with Middle East deployments in mind.  And they will perform reliably in the harshest, most rugged environments.

The company’s towers were deployed by T-Mobile in New Jersey in the wake of Hurricane Sandy.  Installed in July of 2013, they are still up and running with no issues over two and a half years later.

COWs are sometimes used in place of permanent cell tower installations, and Landa mobile towers’ durability and reliability make them ideal for this kind of use.

One of Landa’s long-term customers is Guam Telecom, which purchased model LMS85 HW towers for the third time last year. They stand up to all the challenges of wind, salt air, and storms the Pacific Ocean can throw at them, including 165-mph hurricane winds during a 2015 storm, and keep the remote island territory connected to the world.

This is especially useful for sites like mines, quarries, asphalt plants or concrete yards, where lidar maps can track stocks and changing terrain quickly and without disruption to operations.

Landa Mobile Systems manufactures other products in addition to portable towers. Landa climber training towers are built in monopole and lattice styles, can be configured to client specifications, and are used by universities, unions and companies to safely teach climbing skills.

In addition to its lines of mobile towers, Landa Mobile Systems is a leading manufacturer of gin poles in round, square lattice and triangular lattice configurations, in lengths up to 143 feet. Their gin poles meet or exceed all required industry and government safety standards, and are sold with all required documentation and certificates.

Landa also manufactures a complete line of communication shelters.  These are available in preset configurations in sizes from 8×8 feet to 10×12 feet, or can be designed and manufactured to client specifications.

Completing Landa’s product list are its line of mobile flare towers.  These are invaluable in oil production facilities where pipelines or other means to transport raw natural gas away are not available.

Headquartered in Fayetteville, Arkansas, Landa Mobile Systems, LLC is a member of the National Association of Tower Erectors.

For more information about Landa Mobile Systems, visit the company’s website at landamobilesystems.com.