Before the salad forks were lifted at yesterday’s media luncheon in Washington where Microsoft President Brad Smith was readying his Rural Airband Initiative that would use white space spectrum, the National Association of Broadcasters (NAB) attacked Microsoft’s proposal as “the height of arrogance.”

In a press statement, NAB Executive Vice President of Communications Dennis Wharton said, “It’s the height of arrogance for Microsoft — a $540 billion company — to demand free, unlicensed spectrum after refusing to bid on broadcast TV airwaves in the recent FCC incentive auction. Microsoft’s white space device development has been a well-documented, unmitigated failure. Policymakers should not be misled by slick Microsoft promises that threaten millions of viewers with loss of lifeline broadcast TV programming.” 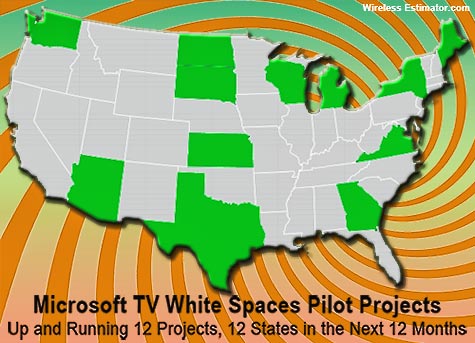 Microsoft believes that the FCC should reserve a vacant UHF white space channel in every market nationwide – a matter that they’ve been lobbying for during the past 10 years – and they maintain that it can be accomplished without causing harm to television stations.

The company claims that they successfully launched a trial WiFi project using white space in Redmond, Wash. In 2009.

Smith said during the luncheon that Microsoft was ready to launch its rural broadband program to two million people in the next five years with the first initiatives involving 12 networks in 12 states in the next 12 months.

He believes that national coverage could be achieved for a cost between $8-12 billion, versus tens of billions for cellular and fiber services, and it could be completed by July 4, 2022. 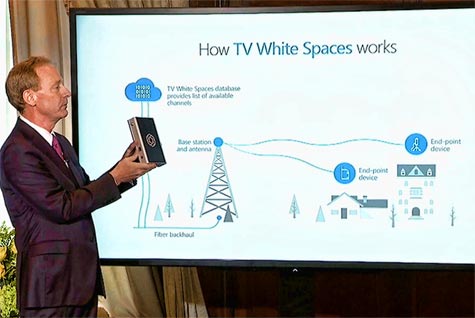 However, although they will invest in the upfront capital projects needed to expand broadband coverage, they said they were going to seek a revenue share from operators “to recoup our investment, and then use these revenue proceeds to invest in additional projects to expand coverage further.”

Microsoft said a combination of new technologies can substantially reduce the cost of extending broadband coverage across the nation. Specifically, a technology model that uses a combination of wireless technology leveraging the TV white spaces spectrum, LTE fixed wireless, and satellite coverage can reduce the initial capital and operating costs by roughly 80 percent compared with the cost of using fiber cables alone.