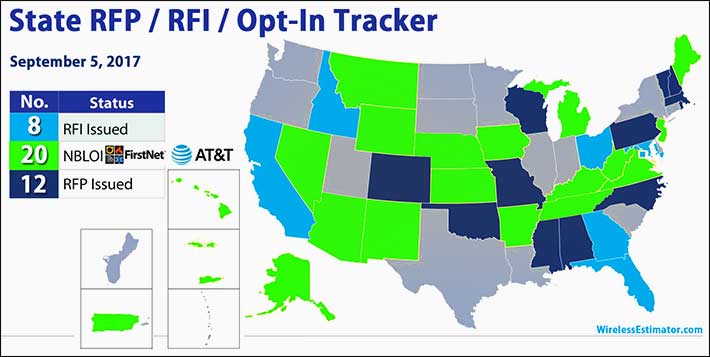 Rivada Networks announced this morning that New Hampshire’s first responders “deserve a dedicated, purpose-built and statewide public-safety broadband network, and Rivada has teamed up with U.S. Cellular to ensure that mission is accomplished.”

In Sept. 2016, Rivada Networks, Herndon, Virg., signed a no-cost, no-obligation contract with the state of New Hampshire to develop an alternative radio access network plan for the state instead of using AT&T and FirstNet. Rivada delivered a draft of that plan in March 2017, ahead of schedule.

Today, U.S. Cellular agreed to assist Rivada in the development of that network, should the governor choose to opt-out of FirstNet’s deployment plan for New Hampshire.

Joe Euteneuer, co-CEO of Rivada Networks, said: “Adding U.S. Cellular to our New Hampshire team strengthens an already compelling offer to the state. We’re delighted to be able to work side by side with a great U.S. Cellular team in the Granite State.”

“U.S. Cellular has been serving the citizens of New Hampshire since 1988 and we are proud of our record of bringing high quality wireless products and services and new technologies to the state,” said Kenneth R. Meyers, president and chief Executive Officer of U.S. Cellular. “We’re honored to team with Rivada in their plan to deploy a high-quality network for public safety officials across the Granite State. This network will help to improve the safety of everyone in New Hampshire.”

Under the agreement, U.S. Cellular will provide its more than 30 years of experience in managing and constructing wireless networks to assist Rivada in the deployment of a state-of-the-art network for New Hampshire’s first responders.

Excess capacity on that network will be offered for commercial use to support wireless users throughout the state of New Hampshire, including U.S. Cellular customers.

“This effort will ensure the best of both worlds, a first-class network public responders can rely on and a commercial network to help augment the insatiable demand for data by New Hampshire consumers,” Meyers said.

“There’s no reason for New Hampshire’s citizens and first responders to accept anything less than the best, which is what Rivada with the assistance of U.S. Cellular will provide.”

On Sept. 1, FirstNet announced that it had over a third of the nation’s states opting into the FirstNet/AT&T network, although many of them are the country’s least populated states.

Early last month, Michigan became the first state to opt-in to FirstNet after issuing a request for proposal.

On Aug. 17, Verizon Wireless announced that it is going to build and operate its own private network core to serve first responders, jumping into the ring with AT&T who has the contract to build out the opt-in FirstNet network.