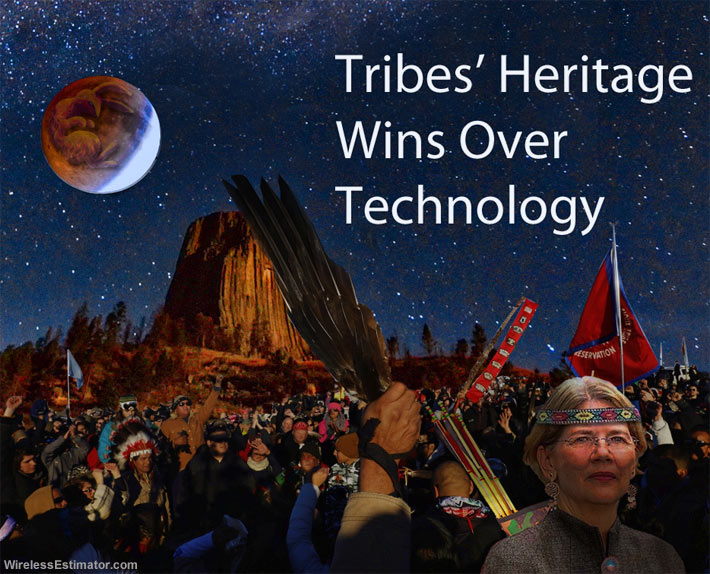 Native American Indians celebrated at Devils Tower in Wyoming last night after the U.S. Supreme Court ruled that Nokia and Vodafone could not build a 4G network on the moon next year since they did not go through the tribal review process that is part of the National Historic Preservation Act. Two months of oftentimes violent protests – eclipsing the Dakota access pipeline demonstrations in size and fervor – were led by Democratic U.S. Senator Elizabeth Warren.

Still smarting from last week’s passage of a rule by the FCC that will streamline the deployment of 5G networks by cutting into the ability of American Native Indian tribes to charge upfront usury fees for review of smaller cell sites throughout the country, tribes took solace in  yesterday’s U.S. Supreme Court decision that scrubbed an effort – temporarily – for a rocket launch next year that would put a 4G network on the Moon because PTScientists didn’t pay review fees to 108 tribes that claim that the Moon is part of their tribal culture and is a religious site.

Justice Ruth Bader Ginsburg wrote the majority 8-1 opinion, stating, “The Court finds that although Berlin-based PTScientists is working with Vodafone whose corporate headquarters is in London and Nokia, being located in Finland, the legal umbilical cord for our celestial decision is firmly tethered in the U.S. since the Moon launch will be from Cape Canaveral, Fla. on a SpaceX Falcon 9 rocket.”

During oral arguments before the court last week, tribal attorneys claimed that the Moon is part of their heritage since they live in close symbiosis with nature because, as told on the shores of Saginaw Bay in Michigan by story teller elders, Cloud Catcher was taken by the Moon Woman.

Rabbit appears to have swayed the Supremes
Also, it was stated that the Moon has a special significance to Native American Indians because they can recount tales of a rabbit that lives on the Moon based upon lunar markings. Last night’s full moon, the second one this month, as seen in the photograph above, appears to support those stories since celebrants kept pointing to what they believe is the vague outline of an embryonic bunny in it.

Perhaps the most convincing argument presented during testimony, albeit threatening, came from a South Dakota tribal leader who said that if they weren’t successful in the SCOTUS hearing that they would ask Grandmother Moon to change the pattern of tides and have the Potomac River “pulverize Washington DC and the detritus scum who lobby within the Beltway.”

In his dissenting opinion, Justice Neil Gorsuch wrote, “Just because Native American Indians gave names to each of the full moons to keep track of the passing year, that doesn’t guarantee them lunar alluvion rights. Doing so would provide unfettered support for raunchy musical inciter Frank Zapa’s daughter Moon Unit, Gov. Jerry ‘Moonbeam’ Brown and others with modernistic claims of spiritual sovereignty and planetary satellite ownership.” 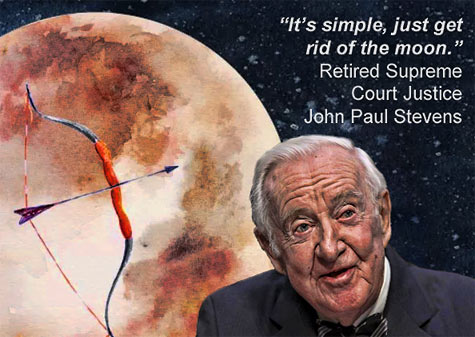 “It’s simple, just get rid of the Moon,” Stevens said.

In an uncharacteristically vulgar comment, the normally assiduously demure Stevens said in an Op-Ed column in The New York Times  today, “F**k it, just get rid of it or call it something else like a filthy disease-ridden rabbit warren. Americans have a short attention span. In 2006, the International Astronomical Union deemed that Pluto was not a planet and there was a huge uproar. Twelve years later nobody gives a flying s**t.”