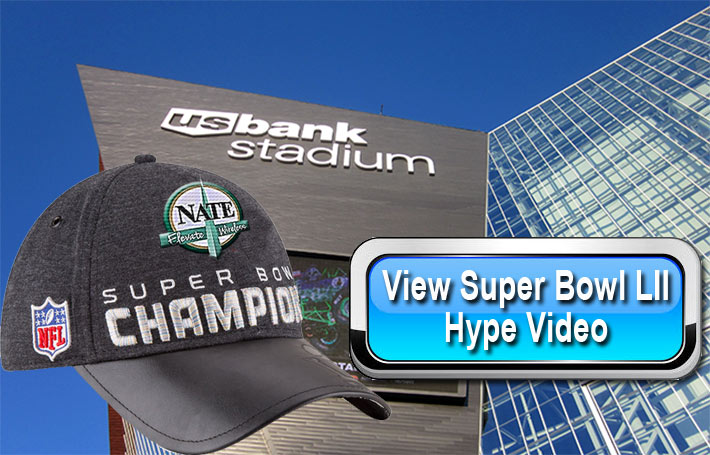 All eyes will be laser-focused on Sunday’s Super Bowl LII kickoff, and it’s unlikely that they’ll even notice eyeball orbs above them containing dozens of cellular antennas improving coverage at ground level. Or Verizon’s antennas hidden in stairway handrails and under some seats.

With the lowest asking price for a ticket on the secondary market going for $6,743 this afternoon to see the Patriots play the Eagles on Sunday in Minneapolis at the U.S. Bank Stadium alongside 70,000 fans, more than 1 million visitors will be content to converge in area venues to share their Super Bowl experiences with selfies and social media posts.

It’s likely that they will not notice the new DAS street furniture and the 1,200 new antennas at the Mall of America along with 50 miles of cable and numerous temporary Wi-Fi access points. Plus, the additional capacity at the Xcel Center, Nicollet Mall and the Minneapolis Convention Center.

By Monday morning the carriers will be extoling how many terabytes of data were consumed and the thousands of hours spent designing and planning increased capacity, but the boots on the ground folks who made it happen – the nation’s wireless workforce – will be ignored as is oftentimes the case in carrier press releases.

However, the National Association of Tower Erectors (NATE) is championing those men and women in a video that celebrates the roll of their member companies whose talent and dedicated professionals make big data a reality.

The video, AVAILABLE HERE is the first to debut in Volume 3 of the Association’s critically acclaimed Climber Connection series.

It celebrates the prominent role communications tower technicians are playing behind the scenes to prepare the Twin Cities’ wireless infrastructure for its biggest test yet, Super Bowl LII.

The fast-paced video shines a spotlight on host venue U.S. Bank Stadium’s sophisticated and ubiquitous wireless network technology that is optimized to meet the capacity demands of wireless users.

The game is just part of the equation, however, when it comes to Super Bowl LII and the video also illustrates how wireless technicians are hard at work densifying networks by deploying small cell antennas and related technology on light poles and other structures in downtown Minneapolis. This small cell technology will ensure that wireless networks will be able to accommodate the big data demands of all of the Super Bowl LII related events and festivities.

“Thanks to the tireless efforts and unsung heroics of tower technicians behind the scenes, Super Bowl enthusiasts can have confidence that the robust wireless networks in the Minneapolis-St. Paul metro area can handle the capacity required to ensure that their calls and social media posts will go through.”