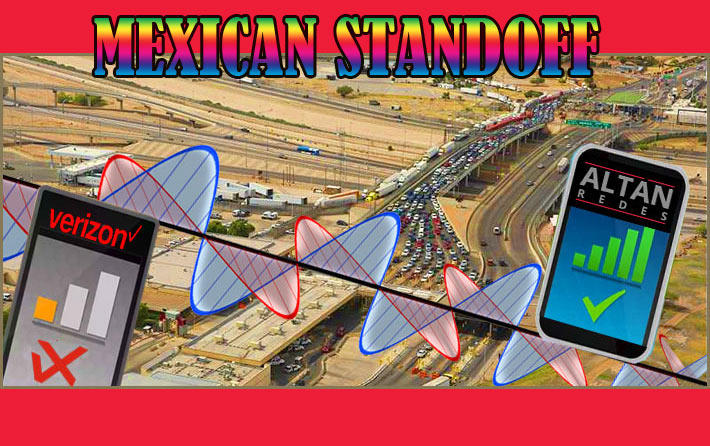 The 700 MHz interference dispute is in the hands of the Instituto Federal de Telecomunicaciones, and the Federal Communications Commission. When Altán Redes won the 700 MHz nationwide $7 billion bid, it was accused of bid rigging. It’s now accused of degrading Verizon’s signal along U.S. border towns.

Thousands of Verizon customers, from El Paso, Texas to San Diego, California, are still fighting to get decent coverage that is being blocked after Mexican wholesaler Altán Redes introduced service three months ago

When Altán started testing their service in August, as reported by Wireless Estimator, the degraded signals were attributed to Mexican carrier Telcel, but today the blame is being placed on Altán,

Altán has exclusive access to a 90 MHz block of spectrum in the 700 MHz band and was Mexico’s only eligible bidder after New York-based Rivada Networks was disqualified for failing to meet the RFQ’s financial obligations.

Rivada, at the time, believed that the Mexican government was underhanded when it awarded the contract to Altán. Rivada accused the government of bid rigging and their allegations overflowed with plots expected in a Grisham novel.

Verizon said it certainly understands the frustration of its customers, but the interference is being caused by Altán.

Altán disagrees, stating that it’s Verizon’s fault and they too are having coverage issues.

Both carriers said that the issue is going to have to be resolved by the FCC and the IFT, the Mexican equivalent of the FCC.

In August, when the problems began, in a letter to United States Senator Ted Cruz, FCC Chairman Ajit Pai said the U.S. Government had tried to intervene prior to Altán launching service but was unsuccessful.

Cruz wrote Pai, stating that the threat of harmful interference for existing US networks is not just speculation.

“Just recently on August 5, only two days after the tragic mass-shooting in EI Paso, Altán decided to operationally test its network in Ciudad Juarez, just across the border from El Paso, utilizing the 700 MHz spectrum band. The result was a severe degradation of the communications network in El Paso including a nearly complete loss of wireless network coverage for the University Medical Center, where more than 10 people injured in the shooting-five of which were still in critical condition at the time-were being treated,” Cruz said.

Altán said in a statement that the interference “is caused by the activity of the United States’ mobile carriers with service in the 700 megahertz band spectrum interfering on the Mexican side — them radiating service into Mexico’s 700 megahertz band and causing interference in both territories — as Altán is not radiating its network service signal into the U.S. territory,” the company said in a statement.

The San Diego City Council is considering a $19 million contract extension for the next five years with Verizon Wireless despite service strength complaints from customers.