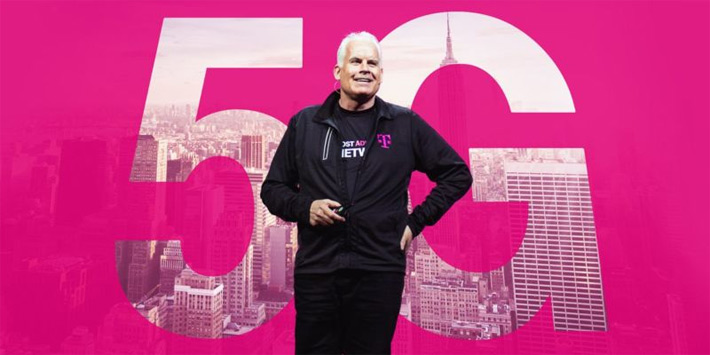 Editor’s note: Instead of paraphrasing T-Mobile CTO Neville Ray’s comments in his blog today, we’ve published it in its entirety. Of interest, he doesn’t comment about any of Sprint’s 5G comments that could be seen as embellishments.

5G is at the height of the hype curve right now. There’s a lot of buzz and froth about this vital, important technology… and there’s also a lot of misinformation. I’m not going to add to either. Instead, T-Mobile is going to continue to be the adult in the room on 5G. I know, it’s uncomfortable for us too. Our 5G goal is not headlines or buzz or bragging rights. No, we’re going to do this right … and when it’s ready for our customers. And in a way that allows us to bring the benefits of 5G to the whole country. That’s our mission and the entire rationale behind the proposed merger with Sprint. We believe the country needs 5G for all. And that’s too important. We are going to get it right.

I wish I could say the same for the rest of the industry. But with the 5G path the other guys are on – what I’m calling the status quo – we will not see the transformational power this technology has to completely change EVERY industry. And that’s not good enough.

Case in point, Verizon’s recent 5G launches in Minneapolis and Chicago a little over two weeks ago. They claimed their second 5G “first,” essentially acknowledging that their first 5G “first” with made-up 5G (W)TF technology last year was not, in fact, a 5G first of any kind. Not to be left out of the empty-first-claim party, AT&T quickly reacted to Verizon’s news by trotting out more cities where they have “launched” 5G … but nobody can use it and they’re not selling any 5G devices. They want us to just trust them that 5G is launched.

They’re both obsessed with claiming first, but at the end of the day, it’s meaningless for consumers. In both cases, claiming first was more important to them than providing a good experience. Why? Because both of their long-term spectrum strategies have severe limitations, so they’re focused on bragging rights instead.

Verizon’s mmWave-only 5G plan is only for the few. And it will never reach rural America. Meanwhile, AT&T has rolled out a “5GE” icon to customers phones to dupe them into thinking their same-old 4G LTE service is something new and different (spoiler alert: it’s not).

Verizon’s launch gave everyone a look at the 5G experience they’ll be charging an extra $10 a month for – and, no surprise – coverage is very spotty and unreliable. Verizon won’t publish a coverage map or acknowledge how limited their strategy really is, but people quickly found that Verizon’s 5G was awfully hard to find, barely available at the places it was promised to be available, dropping repeatedly to 4G and disappeared if they stepped into a building. Their rollout was called a “rush job” and “…confusing. Frustrating. Absolutely insane.”

Some of this is physics – millimeter wave (mmWave) spectrum has great potential in terms of speed and capacity, but it doesn’t travel far from the cell site and doesn’t penetrate materials at all. It will never materially scale beyond small pockets of 5G hotspots in dense urban environments.

Here’s what my team has seen:

But some of the pain and frustration people are experiencing is because Verizon rolled out technology that is nowhere near ready for prime time. Verizon basically launched a science experiment using customers as test subjects. I have the exact same 5G mmWave network equipment and software that AT&T and Verizon do, and there’s no way we would launch this for customers right now.

T-Mobile will bring 5G to market with the Samsung Galaxy S10 5G when the technology is ready for everyday customer use. And – mark my words – we WILL provide a 5G coverage map, limited as it may be.

Is mmWave spectrum important? Absolutely. But real, game-changing, innovation driving 5G requires broad and deep nationwide coverage. And *that* can only be achieved by using ALL SPECTRUM BANDS.

That’s why only the New T-Mobile will bring #5GForAll.

T-Mobile has a strong portfolio of low band spectrum, which provides the wide area coverage necessary to reach every American.  T-Mobile also has mmWave spectrum that provides massive capacity over a very small footprint. It holds big promise for speed and capacity in dense urban areas and venues where large numbers of people gather. And Sprint has the critical middle layer of 2.5 GHz mid-band spectrum, which provides the balance of coverage and capacity that enables a seamless and meaningful 5G experience. Mid-band spectrum is key to providing an ideal mix of coverage and capacity for 5G networks.

The New T-Mobile will utilize its low-band and mmWave spectrum, along with Sprint’s mid-band spectrum to deliver a broad and deep truly nationwide 5G network – the approach that’s NEEDED to serve all Americans, including rural America. And, we won’t charge our customers more for 5G, while Verizon and AT&T continue to jack up prices.

We will keep fighting for consumers and rural America. We’ll keep working toward a 5G future that gives EVERYONE the transformative power 5G can offer by using all spectrum bands – mmWave, mid-band and low-band. We’ll bring our Un-carrier disruptive approach to wireless and beyond. And if our merger with Sprint is approved we’ll fuel new breakthroughs, create thousands of jobs and billions of dollars in value for consumers, all while giving people more choice and more opportunity.

And WE WON’T STOP!