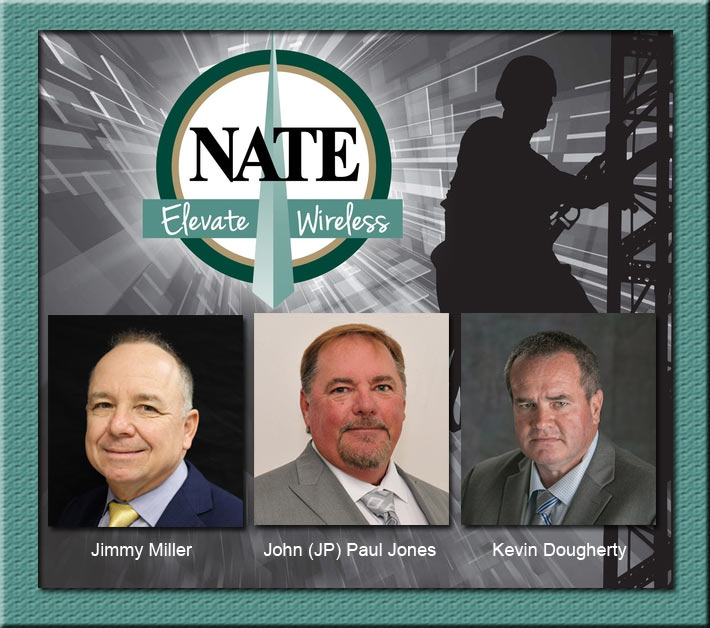 NATE announced today that Board of Directors’ members Jimmy Miller, John Paul (JP) Jones and Kevin Dougherty were re-elected by their peers to serve on the Association’s Executive Committee for the upcoming year. The Association made the announcement on the first day of the NATE UNITE 2020 Conference and Trade Show in Raleigh, North Carolina.

Jimmy Miller, President and CEO of MILLERCO in Gulfport, Mississippi, was re-elected to serve as the Chairman of the Board of Directors. Miller has served on the NATE Board of Directors for nine years and also currently participates as a member of the Association’s  Legislative & Regulatory Committee and  Financial Investment Committee. Miller had an active first year as Chairman having represented the Association at two industry-related events at the White House and recently provided expert witness testimony at a U.S. Senate Commerce Committee Hearing focused on 5G workforce and broadband issues.

John Paul (JP) Jones, President of Tower & Turbine Technologies LLC in Cedar Park, Texas, was re-elected to serve as Vice Chairman of the Board of Directors. Jones has served on the NATE Board of Directors for six years, and also currently serves as the Chairman of the OSHA Relations Committee, as a member of the Legislative & Regulatory Committee and is active on the UAS Committee.

Kevin Dougherty, President of MILLENNIA CONTRACTING, INC. in New Castle, Delaware, was re-elected to serve as Secretary/Treasurer of the Board of Directors. Dougherty has been a member of the NATE Board of Directors for four years and has fulfilled a variety of other leadership roles during his tenure with NATE, including service on the Financial Investment Committee, OSHA Relations Committee, STAR Initiative Ad-Hoc Committee and Workforce Development Committee.

“I would like to congratulate Jimmy, JP and Kevin on being re-elected by their colleagues on the NATE Board of Directors to serve another year on the Executive Committee,” stated Chief Operating Officer Paula Nurnberg. “Having steady leadership and continuity with our executive team will enable the Association to continue to grow and evolve alongside our dynamic industry as we enter a critical phase in the 5G next generation technology deployment cycle,” added Nurnberg.

NATE also plans to formally honor departing Board member Shama Ray, Owner and CEO of Above All Tower Climbing, LLC in Bonne Terre, Missouri for her leadership and years of service to the Association during the NATE UNITE 2020 Awards & Sponsor Recognition Luncheon on Wednesday, February 19.