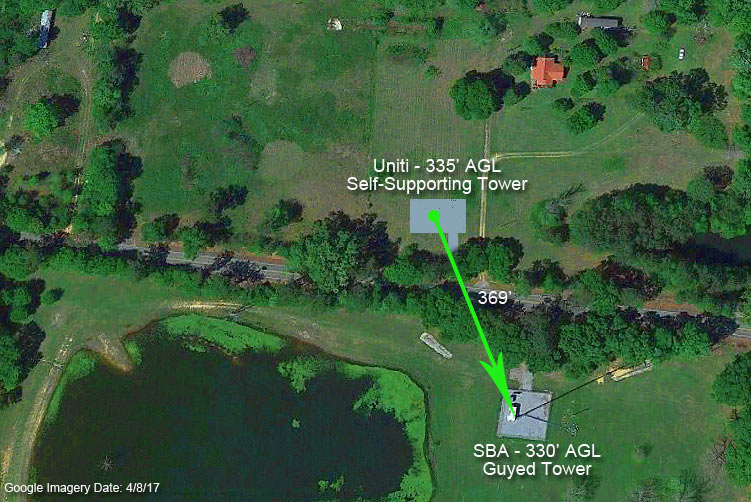 The first and hopefully the last tower tech death in 2020 occurred on Feb. 7, when a gin pole collapsed, killing the worker. The incident occurred during an AT&T site installation on a new Uniti tower directly across the street from an SBA structure.

UPDATE – February 18, 2020: Wireless Estimator has learned that the tower tech that died February 7 in Lumberton, Mississippi was Jim Tinsley, 59, of Baxter, Kentucky.

February 16, 2020 — A Kentucky tower technician passed away on Friday, Feb. 7, 2020 in Mississippi when a gin pole collapsed atop the tower he was working on, crushing the man and causing fatal injuries.

It was the first recorded industry death in 2020.

Local authorities said that they could not provide information regarding the incident, but Wireless Estimator has learned that the worker, whose name is expected to be released tomorrow, lived in Harlan County.

He was employed by Wolverine Wireless, Inc. out of Ohio, whose president, according to available online documents, is William Mattingly. Wolverine was performing an AT&T installation on the tower off of Highway 13 in Lumberton when the sector their crew was lifting caused the gin pole to fail.

Wolverine, founded three years ago, was contacted for additional information, but a representative who would not disclose his name informed Wireless Estimator that any information regarding the fatality should be directed to Premier Site Services of Columbus, Mississippi.

Premier was the subcontractor that was awarded the project by turf vendor Bluestream Professional Services. Premier’s President, John Pumphrey, informed Wireless Estimator yesterday that OSHA has been in contact with his company and they are performing an investigation of the tech’s death.

Pumphrey said that an onsite Wolverine supervisor had contacted him following the fatality, but provided limited information.

Bluestream did not respond to requests for additional details.

According to individuals knowledgeable of the incident, Wolverine was lifting the second AT&T sector when the gin pole failed, folding in at least two locations and laying across the top section of a recently erected 335-foot self-supporting tower like a “horseshoe” as one industry worker described it.

The fully-installed sector frame did not strike the tower when it fell, landing approximately 15-feet from the base section.

The tower tech was on the structure near the top when he was crushed by the pole. A co-worker brought him down, and he was air flighted to a hospital with serious injuries where he was pronounced dead.

The gin pole appeared to be a square PiRod with a number of years of service on it.

OSHA will be investigating whether it was rated and certified to ANSI/TIA-322 with a load chart and if a Class IV rigging plan was in place if the load exceeded 2,000 pounds. It will also be identified if Wolverine had on site a qualified person or competent rigger.

The rural tower, owned by Uniti Towers, was erected in December by another contractor under the direction of Metrosite.

Uniti is one of the tower companies that AT&T is working with in their “build to relocate” strategy to drive lease prices down. Where possible, and economically feasible, AT&T will build new towers to reduce what the carrier calls “excessive rental fees” that present a “vicious model”.

The new tower where the fatality occurred is just 369 feet across Highway 13  from an existing 330-foot SBA guyed tower.

It is not known if AT&T is currently on that tower or if the structure could accommodate the additional loading.

The nearest structure is a 302-foot Verizon self-supporting tower 1-3/4 miles southeast on Highway 13.