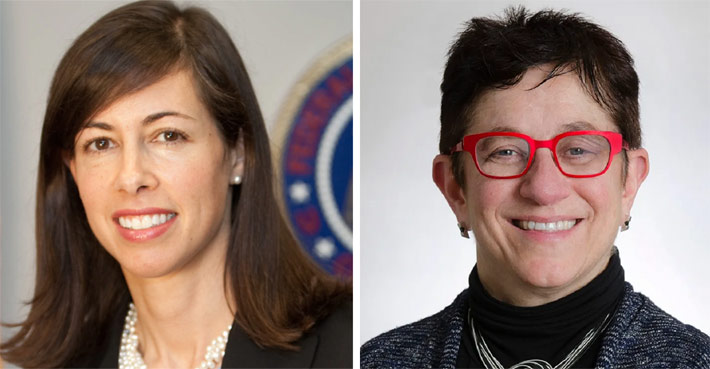 After 10 months of waiting, President Joe Biden today nominated Acting FCC Chair Jessica Rosenworcel to lead the agency permanently. He also nominated former FCC official Gigi Sohn, a longtime consumer advocate, to the open Democratic seat on the Commission. During the Obama years she was then-FCC Chairman Tom Wheeler’s counselor, a role in which she advocated for strong net neutrality rules.

The announcement gives Democrats a majority on the five-person panel for the first time during Biden’s presidency, ending a 2-2 partisan deadlock that has hindered  much of the progressive agenda for the FCC.

Biden was able to promote Rosenworcel from acting to permanent chair immediately , but Rosenworcel’s current five-year term already expired and she would have to leave the FCC entirely  in January if she is not confirmed by the Senate.

During her time at the agency, she has worked to promote greater opportunity, accessibility, and affordability in the FCC’s  communications services in order to ensure that all Americans get a fair shot at 21st century success, the White House said in a statement.

“NATE congratulates Chairwoman Rosenworcel on being designated as the first woman to serve as the Chair of the Federal Communications Commission. Throughout her public service, as a Senate staffer and as Acting Chairwoman, she has been a thoughtful and engaging leader,” said Todd Washam, NATE Director of Government Relations and Wireless Industry Network. “NATE welcomes the opportunity to continue to work with her to expand broadband services, improve telehealth services, and other contractor priorities. NATE encourages the Senate to act on Chairwoman Rosenworcel’s re-nomination so she can continue to serve in this position.”

Washam continued, “NATE also congratulates Gigi Sohn on her nomination to serve as an FCC Commissioner. Ms. Sohn has considerable experience working on issues under the FCC’s jurisdiction, and NATE looks forward to working with her to expand broadband services and other NATE priorities.”