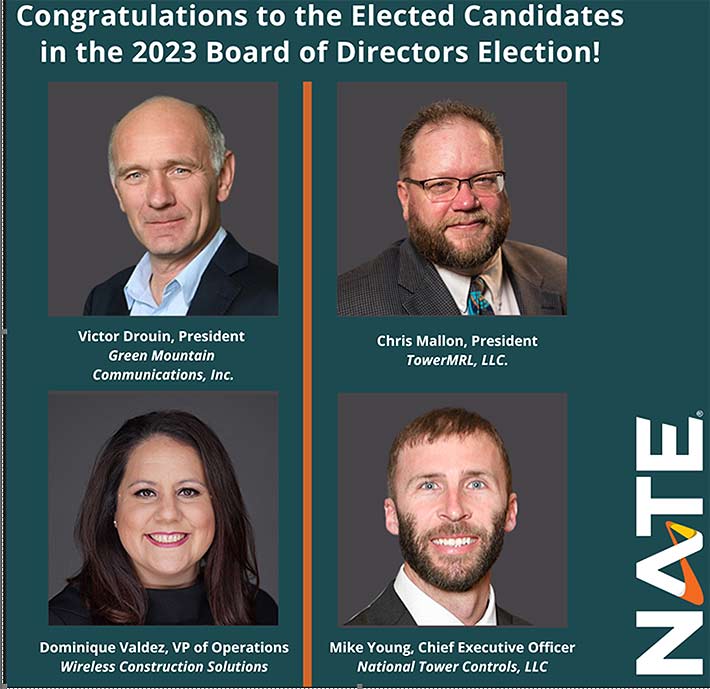 NATE: The Communications Infrastructure Contractors Association today unveiled the official results of the 2023 Board of Directors election. The Association announces that Victor Drouin, President of Green Mountain Communications, Inc. in Pembroke, New Hampshire, and Chris Mallon, President of Tower MRL, LLC in Cottage Grove, Wisconsin, were re-elected and will retain their respective seats on the NATE Board of Directors.

NATE also announces that candidates Dominique Valdez, Vice President of Operations at Wireless Construction Solutions in San Antonio, Texas, and Mike Young, Chief Executive Officer of National Tower Controls, LLC in Hartford, South Dakota, were elected to serve as new members of the Board of Directors.

The four candidates who were elected by their industry peers will officially begin their new three-year terms in February at the Board of Directors meeting that takes place in conjunction with the NATE UNITE 2023 Conference in Orlando, Florida. 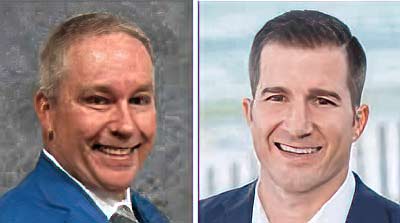 Also running for a seat on the Board were (at left) Ian Stringfellow, Vice President of Operations, Ontivity, in New Braunfels, TX, and Brian Ford, CEO of FordCom Tower Service LLC, in Jupiter, FL. NATE expanded the number of directors from 9 to 11 members due to the enhanced visibility of the Association and the need for Board oversight for NATE’s ever-increasing committees supporting and educating the industry.

“I would like to offer my congratulations to Victor, Chris, Dominique, and Mike on their successful election bids. I would also like to thank all the declared candidates who stepped up to run in what was an extremely competitive, hotly contested election,” said President & CEO Todd Schlekeway.

“Due to the membership growth and enhanced visibility of the Association, NATE’s Board of Directors will officially expand from 9 to 11 members beginning in February of 2023. The newly seated Directors will play a critical role in collaborating with NATE’s staff and volunteer committees to implement the ambitious goals and objectives outlined in the Association’s five-year strategic plan. Additionally, 2023 is a watershed year in the industry as generational investments will be made for the deployment of mobile broadband infrastructure to scale 5G and close the digital divide. Therefore, it is incumbent that NATE’s leaders keep our eye on the ball to ensure that NATE member companies can benefit directly or indirectly from this deployment funding.” added Schlekeway.

Board member terms will now be three years instead of two. This change was seen by the existing Board as a positive change and will allow NATE to have a better ratio of Directors to Members.