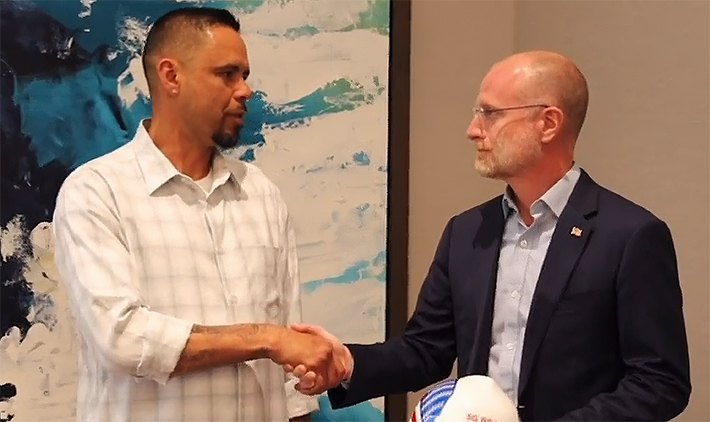 FCC Commissioner Brendan Carr (at right) climbed with foreman Robert Gallegos and presented him with the coveted 5G Ready Hardhat. A video of the presentation to Robert can be found here.

America’s tower crews are a mainstay in the country’s buildout of 5G and other next-generation infrastructure. Their work helped millions of Americans stay connected through the COVID-19 pandemic—as people relied on these networks for everything from working to learning to connecting with family and friends.

Their work has also played a critical role in securing and preserving America’s 5G leadership.

FCC Commissioner Brendan Carr has been recognizing the contributions of these hard-working tower technicians through a series of 5G Ready Hard Hat presentations.

Yesterday, Carr recognized another talented 5G worker—Robert Gallegos, a foreman who embraced the opportunity to turn his life around after bouts with drugs that landed him in prison. Gallegos is featured in the movie Vertical Freedom.

Carr had the opportunity to climb with Gallegos in Lordsburg, NM, while he and his crew were constructing a new tower that would expand public safety communications.

Carr issued the following statement: “When Americans pick up their smartphones or turn on their connected devices, many just assume that the networks are going to work—as if they run on magic. In reality, it’s the hard work of tower crews that power America’s world-leading wireless networks. Robert is a great example of a tower climber with the skill and determination that is required for America to maintain its 5G leadership.”

“After climbing with Robert in Lordsburg, New Mexico in 2020, I was inspired by his story and work ethic. After losing his job due to drug use and ultimately landing in prison, Robert turned his life around and came back to the tower industry clean and sober. Indeed, Robert exemplifies how tower climbing is not just a career—it can also serve as an opportunity for people to lift themselves and their families up.”

“In addition, Robert serves as the safety trainer for his company, which enables him to help ensure that his team stays safe and can enjoy the same opportunities that the tower climbing industry has provided him. I am honored to recognize his work with this 5G Ready Hard Hat.”

Gallegos is from Albuquerque, NM, where he works as a foreman and safety trainer for Advanced Tower Services, Inc.