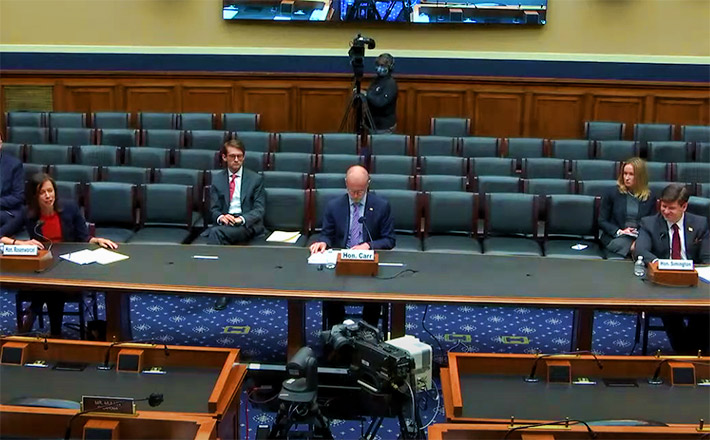 However the maps will still have to be released to the states for their input on accuracy, and the FCC will then do any applicable revisions before they are finalized,  Rosenworcel explained.

Testifying before the subcommittee were  Rosenworcel and Commissioners Brendan Carr, Geoffrey Starks, and Nathan Simington. The FCC is currently short one commissioner as the confirmation of Gigi Sohn, President Biden’s nominee, has remained in a holding pattern due to Senate deadlock.

The FCC is currently in the process of completing updated broadband maps. During the hearing, Carr said, “Getting those maps done is going to be key to ensuring that we properly target the billions of dollars in Federal funds that are now available for broadband.”

Cybersecurity was a frequent concern of committee members and FCC Commissioners.

“In the wake of the Russia-Ukraine conflict,” Rosenworcel said in a prepared statement, “we’ve joined CISA in their Shields Up initiative, required new on-air disclosures for foreign-backed broadcasts, launched an internal assessment of Russian ownership of telecommunications interests in the United States, and started an inquiry into Border Gateway Protocol security to explore internet routing vulnerabilities. Next month, I will convene the first principals-level meeting of the Cybersecurity Forum for Independent and Executive Branch Regulators, to better coordinate the government’s response to evolving cyber threats.”

Commissioner Brendan Carr discussed the avenues that the FCC has taken to further secure communications networks from entities that threaten the nation’s security.

“We are doing so on multiple fronts. For one, over the past 5 months, we have revoked the domestic and international Section 214 authority of four carriers—China Telecom Americas, China Unicom Americas, Pacific Networks, and ComNet—based on serious national security concerns. For another, the Commission opened a proceeding last year at my urging to address a loophole that allows entities like Huawei to continue to install equipment into U.S. networks even after they have been determined to pose an unacceptable risk to our national security,” said Carr in his prepared statement.

“Thanks to strong leadership from Representatives Steve Scalise and Anna Eshoo—who spearheaded the work to pass the Secure Equipment Act—the FCC now has additional authorities to close this loophole. I look forward to reaching a final determination on this soon,” said Carr.