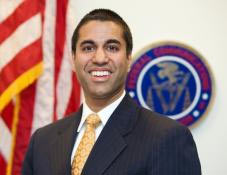 broadband were good for the nation, stating that Wheeler had dismissed arguments that classifying broadband as a common carrier service would depress investment, but data is proving that opponents were correct.

Pai said in a speech to the American Enterprise Institute Wednesday that he had no doubt they “desperately hoped for their forecast to come true. But as John Adams warned over two centuries ago, ‘whatever may be our wishes, our inclinations, or the dictates of our passions, they cannot alter the state of facts and evidence.’ ”

Paid said a friend and former Chief of Staff to a Democratic Commissioner wrote earlier this month that “a disquieting anti-business bias has become manifest” at the FCC and that the Commission is acting in a manner that is “antithetical to the needs, interests and well-being of the telecommunications, media and technology sector.”

“I share his concern, Pai said, “And I worry that a wave of meddlesome and heavy-handed FCC intervention into the marketplace, of which Title II is just one crest, is impeding investment and innovation.