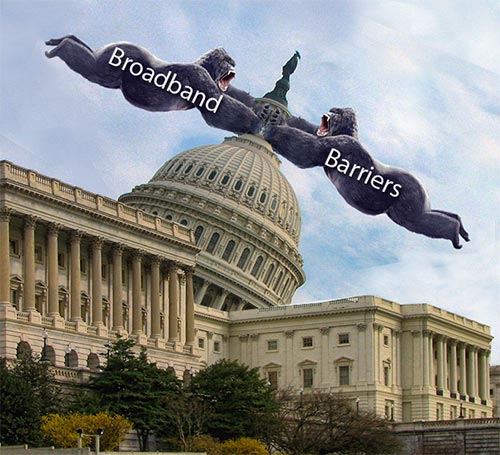 The head of PCIA – The Wireless Infrastructure Association this morning urged the Senate to help alleviate the barriers hindering wireless broadband deployment so that the U.S. can continue meeting the “nearly insatiable and increasing demand” for mobile data and strengthen its capacity to compete in the global marketplace.

“Wireless infrastructure enables the economic growth and technological innovation that is delivered by mobile broadband, including the Internet of Things, the app economy, and many future efficiencies and commercial opportunities,” said Jonathan Adelstein, the President and CEO of PCIA, in testimony before a hearing of the Senate Committee on Commerce, Science, and Transportation.

“Wireless infrastructure has the power to transform a city in economic decline into an innovation hub.  It can breathe new life into aging commercial zones, and provide rural areas the ability to compete in the innovation economy,” Adelstein said.

Adelstein said that the federal government is losing out on a revenue stream because tower companies will build near federal land rather than attempt to negotiate with federal agencies.

When questioned why cell towers weren’t be used in a W. Va. Federal forest, Adelstein said PCIA members “are loathe to go into Federal lands.”

Adelstein was one of five officials to testify at the hearing called by Committee Chairman John Thune (R-SD) to explore ways of accelerating broadband development.

Thune’s hearing was part of a series aimed at producing bipartisan broadband legislation. Adelstein, a former Federal Communications Commission (FCC) Commissioner, addressed PCIA’s key public policy priorities, among them the urgent need to streamline wireless facility siting procedures, help communities adapt to new siting regulations, and utilize federal property to deploy wireless facilities.  He also noted that more work is needed to provide connectivity to native nations so that these communities can take advantage of the benefits that broadband provides.

Adelstein applauded the Committee’s leadership for its efforts to eliminate barriers to infrastructure deployment, most significantly its work on Section 6409(a) of the Middle Class Tax Relief and Job Creation Act of 2012, which has made an “enormous difference” in speeding the deployment of wireless infrastructure.

“The FCC’s outstanding and aggressive implementation of this law grounded Congress’ work with a clear regulatory framework,” added Adelstein.

“To maximize the promise of wireless broadband for economic growth, job creation and technological innovation, infrastructure builders need the capital to invest—and we need regulators and Congress to help, as this Committee has long realized,” Adelstein concluded.