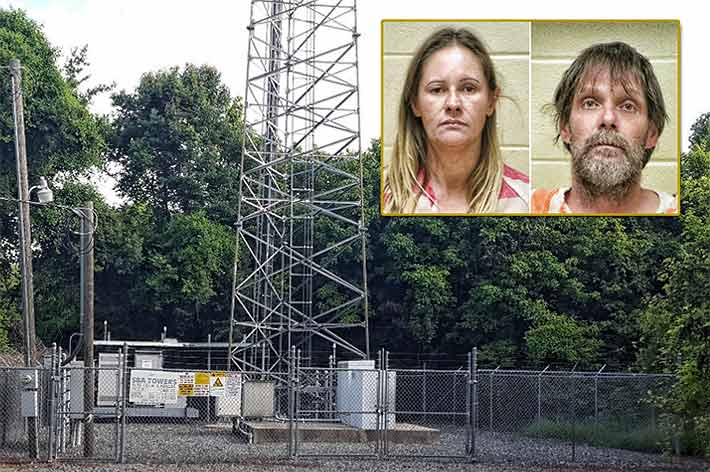 Michelle Herrada and Charles Krupnik were arrested after stripping copper from cell towers, one being this SBA Communications site. Krupnik told authorities he was “Simply trying to make a living.”

Bossier Sheriff’s Office detectives arrested a Texas couple in early April for stealing copper from cell phone tower sites in Bossier Parish, La., but the case continues as charges are pending from neighboring parishes, and detectives are working with five other counties in Okla. regarding the same crimes involving this duo.

According to a department press release, Charles Krupnik, 51, and Michelle Herrada, 43, of the 3200 block of Obenchain St. in Dallas, were charged with seven counts of simple burglary on April 7, following a nearly four-month investigation by the Bossier Sheriff’s Office. Detectives determined the live-in couple of about 15 years stole some 1,000 pounds of copper from four different cell phone tower sites in Bossier Parish.

During the investigation and subsequent arrest, Bossier detectives were able to connect the pair to more than a dozen other cases in area parishes and five counties in Okla.

The case began back in January when Bossier patrol deputies met with a local AT&T representative at a cell phone tower location where he reported a break-in and theft of about 750 feet of copper tubing and wiring. As detectives investigated that case, they discovered that three other cell phone sites in Bossier Parish had been burglarized, as well as cell phone sites in Caddo, Webster, Desoto, Natchitoches and Bienville Parishes and counties in Oklahoma. At this point in the investigation, charges for Krupnik and Herrada are with Caddo, Webster, Desoto and Natchitoches Parishes, as well as Marshall County in the Sooner State.

According to authorities, the couple would drive around in various locations in northwest Louisiana, usually early in the morning around 3 a.m., until they saw a cell phone tower location. Herrada would then drop off Krupnik, and he would use bolt cutters to cut through the fence and then cut power to the site. He would also move security cameras around to avoid being caught on camera. He would then cut open tubing used at the tower site, cut out the copper, and Herrada would return to the site for their getaway. They would then sell the copper at a scrap yard near their home in Dallas.

The U.S. Marshals Service aided the Bossier Sheriff’s Office in picking up the couple as they were leaving a scrap yard Dallas.

Krupnik said he was simply trying to make a living; he was previously convicted of theft of copper wire and engaging in organized criminal activity in Sept. 2010 in Texas.

Krupnik and Herrada are currently incarcerated in the Bossier Parish Security Facilities in Plain Dealing with a bond of $105,000. They did receive their one phone call…on a landline.