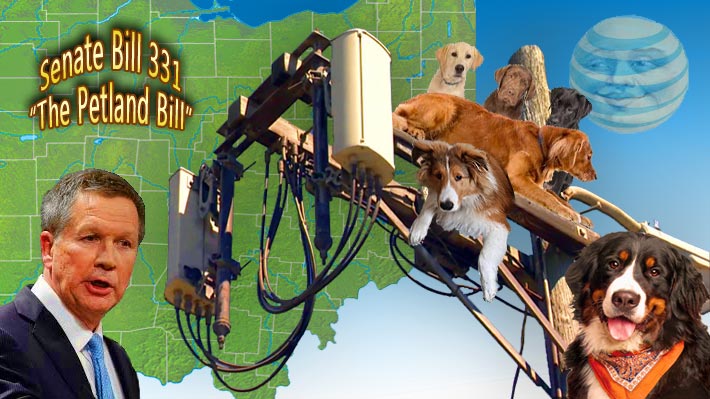 Ohio Governor John Kasich signed the “Petland Bill” on Dec. 19, 2016, restricting where pet stores could get the animals they sell. Tucked into the lame duck bill at the last minute were sweeping reforms sponsored by AT&T to expedite the telecom permitting process in the rights of way of the State’s 938 municipalities.

DAS-provider Mobilitie LLC’s petition to the FCC for a declaratory ruling to promote broadband in the U.S. by prohibiting excessive charges for access to public rights of way was championed by AT&T, at least in Ohio, where the carrier last month lobbied for and successfully sneaked in an amendment inside a bill regulating puppy mill providers.

The questionable legislative procedure is called “logrolling” and it may be illegal.

It passed, and effective March 21, 2017, the maximum amount that can be charged must be the lesser of $200 annually per attachment or the actual, direct, and reasonable costs related to the use of the wireless support structure in the rights of way for all of Ohio’s 938 communities.

In its FCC petition, Mobilitie had cited an instance in Texas where a community wanted an annual $20,000 fee for a new pole in a right of way, and $2,000 annually for each pole, even where the attachment would require no disturbance of the underlying right of way.

And although all four major carriers serving Ohio, AT&T, Verizon, Sprint and T-Mobile, are most likely thrilled with the passage of Senator Bob Peterson’s “Petland Bill,” SB 331, Mobilitie might be ruing the idiom, be careful what you ask for.

According to Ohio Municipal League (OML) Executive Director Kent Scarrett, Mobilitie can’t take advantage of SB 331 because the new legislation only allows the big four carriers and cable operators to benefit from its passage.

Scarrett informed Wireless Estimator that his association wasn’t aware of AT&T’s request until four weeks prior to its amendment into SB 331.

He said that when his organization found out about the “onerous” bill that would have stripped almost all control from Ohio’s municipalities, OML teamed up with American Municipal Power, Ohio to change the language.

His members contacted their legislators and were able to get AT&T to reluctantly agree to some changes in the amendment since the carrier knew that it would be difficult to get their changes into a stand-alone bill.

AT&T originally wanted the ability to attach their antennas to any structure capable of supporting it, according to Scarrett, but the final bill does not include municipal utility poles and “wireless support structure” is now limited to poles, sign poles, light poles, traffic signals, and non-municipal utility poles in the right of way.

AT&T’s intent was also to include buildings, water towers, and other structures.

A primary concern during their groups’ first meeting with legislators, Scarrett said, was AT&T’s request that anyone could apply for consent.

Scarrett said the language crafted in the bill that was signed by Governor Kasich on Dec. 19, 2016, only allows the four carriers and franchised cable operators to apply for consent.

“Third party groups like Mobilitie cannot apply,” said Scarrett. “If they believe they have the right to apply, that will have to be determined by the courts.”

The OML said that they were unaware of any issues that AT&T or others have experienced in Ohio “that warrant blanket Draconian restrictions specifically on municipalities through statute.”

Scarrett said he has heard from a number of other associations who are concerned about the new siting legislation and they are monitoring its progress. He said the National League of Cities is not supportive of AT&T’s amendment.

Mobilitie did not respond to a request to discuss the Ohio legislation.

“Petland Bill” was originally sneaked into a tax bill
In May, the Ohio Senate Ways and Means committee removed the puppy mill bill that was amended to an unrelated general tax bill.

The “Petland Bill” was then introduced on its own merits, but runs the risk of violating the single subject rule set in the Ohio Constitution that specifies that “no bill shall contain more than one subject, which shall be clearly expressed in its title.”

In 2004, the Ohio Supreme Court held that a “manifestly gross and fraudulent violation” of the single-subject rule can be invalidated, when it was presented with a 24-line amendment to a state mortgage recording statute in a 172-page bill. 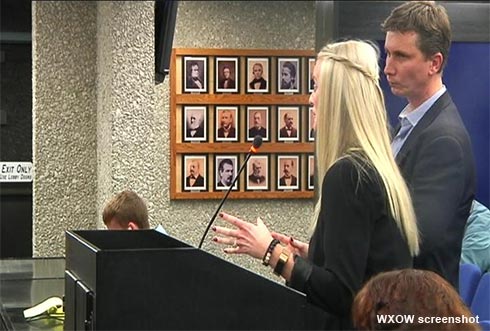 Mobilitie representatives provided an outline of their plans in La Crosse, Wisc., and said that they would be resubmitting them at a later date.

Last night, Mobilitie, operating as Wisconsin Technology Networking, LLC, announced that they were temporarily withdrawing their request to install 13 cell towers in public rights of way in La Crosse, Wis. for Sprint.

In a public hearing before the Board of Public Works, Mobilitie’s representatives showed photographs of sites that had been built in Illinois and Ohio.

The wooden poles, approximately 75 feet in height, are needed to provide coverage for the City, Mobilitie representatives said.

“Similarly, pole height is critical in achieving network performance. Higher antennas are free of clutter such as tree canopy, buildings, and other manmade obstructions. The signal emanating from them isn’t diluted by this clutter layer and delivers a better wireless experience,” Mobility said in earlier correspondence. 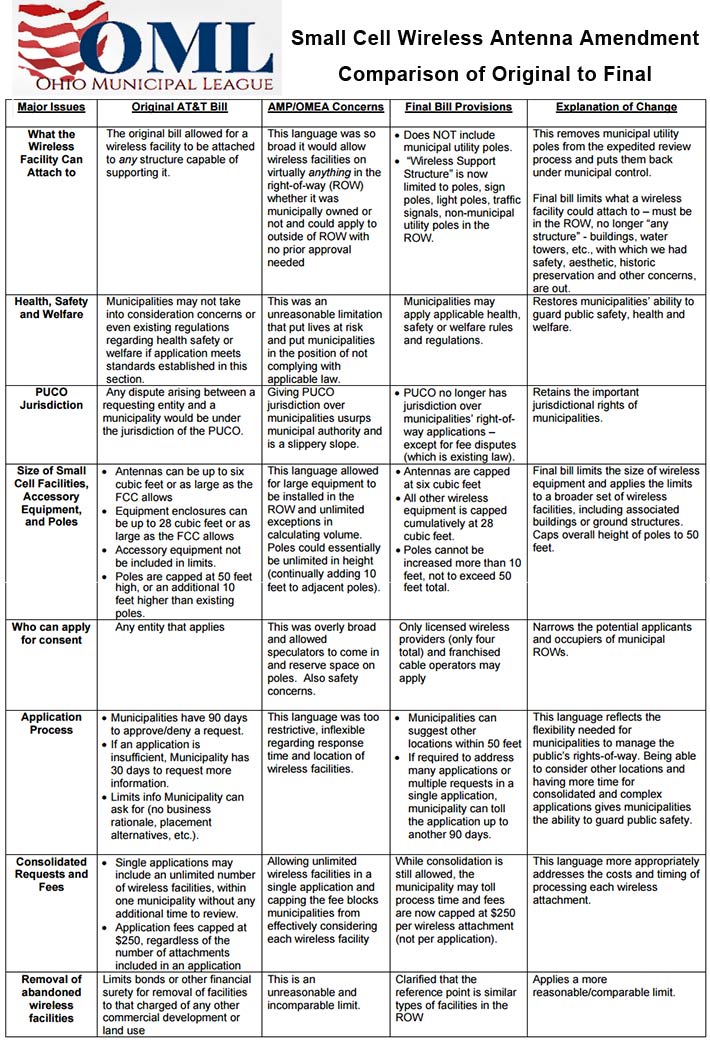