At Ajit Pai’s first open meeting as the Federal Communications Commission’s Chairman, he emphasized the need to close the digital divide, and he believes the creation of a broadband deployment advisory committee that will be active for two years will assist in that effort.

However, he didn’t discuss how he would proceed on key rules that he opposed under the former Chairman, Tom Wheeler. 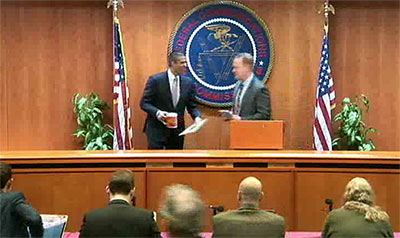 In a press conference following FCC business, Pai didn’t answer questions from reporters regarding how the agency would move forward on the FCC’s net neutrality rules.

Pai has submitted paperwork to create the advisory committee that will “identify regulatory barriers to infrastructure investment and to make recommendations to the commission on reducing and or removing them.”

A public notice should be coming soon with more details on its role and member selection, with Pai stating it will be comprised of 15 members from industry, consumer and community organizations.

Issues the Committee will tackle include further reforms to the FCC’s pole attachment rules; identifying unreasonable regulatory barriers to broadband deployment; ways to encourage local governments to adopt deployment-friendly policies; and other reforms within the scope of the Commission’s authority.

“Our hope is that with a model code approved by the FCC, one that any city could use as a template, the case for broadband deployment would be much easier, especially for communities that seek to proactively encourage it,” Pai said.

Individuals or organizations interested in serving on the committee should visit www.fcc.gov/broadband-deployment-advisory-committee  for information on the nominating process.

Two public filing requirements eliminated
When questioned how the current Lifeline internet subsidies might affect his efforts to close the digital divide, he said the Obama-era rules are “one of the areas we are currently reviewing, and we haven’t made any determinations as of this time.”

During the open meeting, the board voted to eliminate two public filing requirements. One rule required television and broadcast stations to keep physical copies of letters from viewers and listeners and make them available.

Another required cable operators to maintain and allow public inspection of the location of a cable system’s principal headend.

Pai cited the ease of digital records and the need to reduce needless regulation. Fellow Republican Commissioner Mike O’Rielly and Democratic Commissioner Mignon Clyburn both voted in favor of removing the rules.

“A few years ago, I visited KKOW-FM in Pittsburg, Kansas.  It’s one of the radio stations I listened to a lot growing up.  During my visit, the station’s staff showed me an imposing series of huge file cabinets filled with folders, each folder stuffed with paper.  It was the station’s public inspection files, dating back many years.  When I asked how often members of the public came to inspect them, they laughed—I was the first that anyone could remember, and they had been with the station a long time,” Paid said.

“What they didn’t laugh about was the burden of maintaining all that paper.  KKOW is a small station, and its staff are stretched thin handling programming, sales, technical matters, and . . . paperwork.”

“While physical letters from viewers today may not play the role they once did, this does not lessen the importance of the public having a direct means to communicate with their local broadcaster,” Clyburn said in her opening statement. “Thankfully, nothing in this order changes that.”