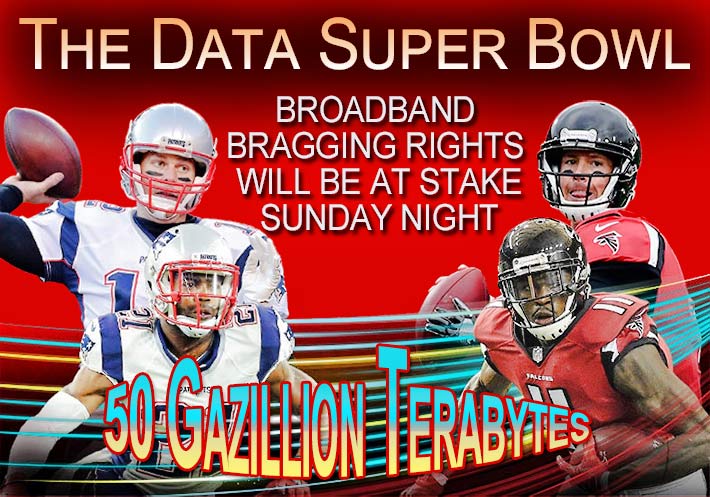 The Patriots and Falcons will match up in Houston Sunday at NRG Stadium, and the nation’s wireless carriers are kicking off their public relations campaigns this week to show how they’ll be capable of handling whatever their subscribers throw their way.

But unlike today’s odds where New England is installed as a three-point favorite over the Falcons, the odds of the media correctly getting the projected and final numbers of the amount of carrier data gobbled up by fans might have a bigger spread, since a lot of the information proposed as gospel comes from embellished reports from carriers.

The best number being cobbled together is it is expected to be over 10 terabytes (TBs) of data, a number as good as any other guess.  The 10 TBs amount  is mostly attributed to information provided by Levi’s Stadium (below) of data that was transferred during last year’s Super Bowl where Verizon said it handled the most traffic, 7 TBs.

But T-Mobile cried foul, with CTO Neville Ray stating that while Verizon claimed it was kicking butt regarding the number of plays and field goals streamed, T-Mobile doubled the carrier with data speeds at the big game that were double those provided by Verizon.

However, this year’s 10 TBs guess may be slightly off by 59% since following Super Bowl 50, announcements from the big four carriers boasted their data counts – Verizon, 7 TBs; AT&T; 5.2 TBs; T-Mobile 2.1 TBs; and Sprint, 1.6 TBs – a total of 15.9 TBs on the in-stadium distributed antenna system (DAS) network as well as any macro deployments outside the stadium in parking lot areas.

No matter who wins the Super Bowl, carriers will all find a handle to state that they came out on top.

But with further reading it was identified that the total included the usage by subscribers “in the Bay Area on game day and throughout Super Bowl week.”

And towards the end of their release, Verizon footnoted how they identify a week: “Total network data used over 9 days.”

To hedge our bets, our projection is that there is a possibility that data transfer could be up to 50 gazillion TBs, with the additional caveat that it could easily be topped if Lady Gaga has a wardrobe malfunction during the halftime show.