The National Association of Tower Erectors (NATE) today released the official results of the 2018 Board of Directors election, announcing that candidates Kevin Dougherty, President of MILLENNIA CONTRACTING, Inc. in New Castle, Del.; John Paul Jones, President of Tower & Turbine Technologies LLC in Austin, Tex.; Bryan Lee, President of Lee Antenna & Line Service, Inc. in Hellertown, Pa and Jimmy Miller, President of MillerCo, Inc. in Gulfport, Miss. were re-elected and will retain their seats on the Board. 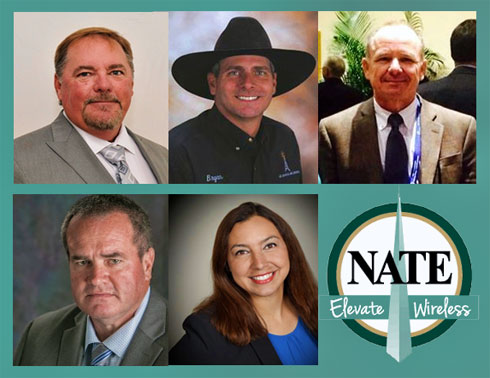 NATE also announced that candidate Shama Ray, Owner and CEO of Above All Tower Climbing LLC in Bonne Terre, Mo. was also elected to serve as a new member of the Board of Directors.

Based upon her background as a firefighter/paramedic and then becoming a chief medical officer, Ray came to the industry already entrenched in a culture of safety after witnessing first-hand the horrific effects of not following workplace safety guidelines,

Her 20 years of experience involves extensive leadership and training roles. She also has experience with high angle rescue and ropes and rappelling.

She started working on 911 Towers and later expanded to cellular and radio. Ray obtains all the same training as her employees and she is also on the Women of NATE (WON) committee and has been a speaker at NATE events.

“I am honored to have been chosen for a Board of Directors position,” Ray said.

“The safety of Tower Climbers is my number one priority. I would like to improve safety across the nation so that all of the men and women who risk their lives can go home to their families safe and sound.”

Employees of Above All Tower Climbing are expecting to move into their new campus within the next months on 27-acres of land in Desoto, Mo. Ray said that she is initially putting on an additional three to five more crews immediately and has an ambitious goal of being at 40 crews by the end of 2018.

The five candidates who were elected by their industry peers will officially begin their two-year terms on February 17, 2018 at the NATE UNITE 2018 Conference in Nashville, Tenn.

“Congratulations are in order to all of the candidates who threw their hat in the ring in this competitive election,” said Chief Operating Officer Paula Nurnberg. “The elected members of the Board will be joining a dynamic and evolving organization that is on the front lines elevating wireless and broadcast infrastructure policies on the road to 5G,” added Nurnberg.

The Association also acknowledges the contributions of retiring two-term Board Member Don Train, President of Train’s Towers Inc in Haddon Heights, N.J.. Train will be honored at the NATE UNITE 2018 Conference for his service.

“Don’s extensive industry experience provided a valuable and unique perspective during his tenure on the Board of Directors and we appreciate his dedicated service,” stated NATE Chairman Jim Tracy from Burley, Wa.

Also running for the Board was Chris Memmott, President of Triple M Enterprises based in Nephi, Utah.