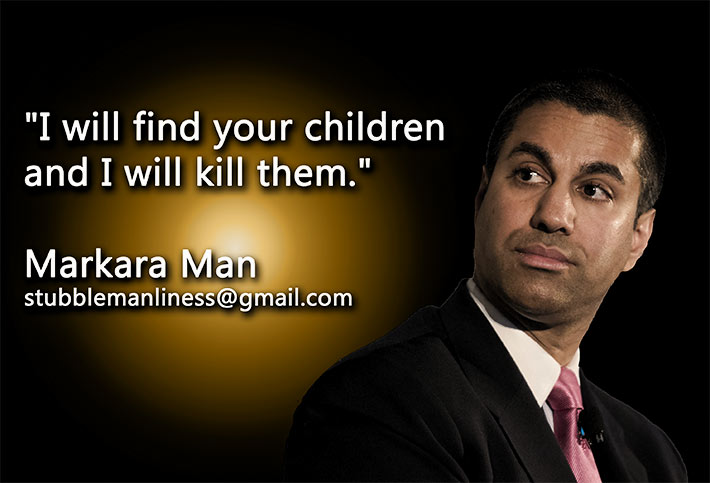 FCC Commissioner Ajit Pai’s children were threatened by a California man, Markara Man, last December.  Authorities did not provide a photograph of Man.

A 33-year-old Asian male from California was arrested Friday in Los Angeles on charges of threatening to kill the family of Ajit Pai, Chairman of the Federal Communications Commission, for Pai’s role in repealing regulations relating to net neutrality.

According to unsealed court documents, on or about Dec. 19 and 20, 2017, Markara Man, of Norwalk, allegedly sent three emails to Chairman Pai’s email accounts. The first email accused Chairman Pai of being responsible for a child who allegedly had committed suicide because of the repeal of net neutrality regulations. The second email listed three locations in or around Arlington, and threatened to kill the Chairman’s family members.

The third email had no message in its body, but included an image depicting Chairman Pai and, in the foreground and slightly out of focus, a framed photograph of Chairman Pai and his family. The FBI traced the emails to Man’s residence in Norwalk, Calif., and when initially confronted in May 2018, Man admitted to the FBI that he sent the email threatening Chairman Pai’s family because he was “angry” about the repeal of the net neutrality regulations and wanted to “scare” Chairman Pai.

Man is charged with a threatening to murder a member of the immediate family of a U.S. official with the intent to intimidate or interfere with such official while engaged in the performance of official duties, or with the intent to retaliate against such official on account of the performance of official duties. If convicted, Man faces a maximum penalty of 10 years in prison. Actual sentences for federal crimes are typically less than the maximum penalties. A federal district court judge will determine any sentence after taking into account the U.S. Sentencing Guidelines and other statutory factors.