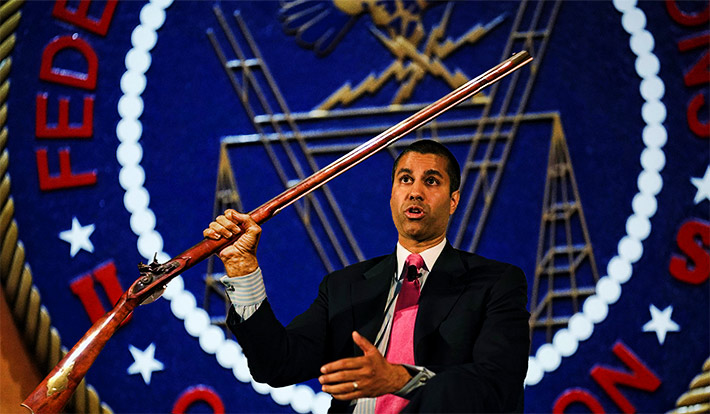 FCC Chairman Ajit Pai was informed on Friday that he would be receiving a Kentucky handmade long gun in recognition of his receiving the National Rifle Association’s Charlton Heston Courage Under Fire award, but he has to pick it up at the NRA’s museum since weapons weren’t allowed at the Conservative Political Action Conference in Maryland. He most likely will not be able to bring it into FCC headquarters unless he can get it plugged and reclassified by Public Safety & Homeland Security as a giant swizzle stick for his over-sized Reese’s coffee mug.

FCC Chairman Ajit Pai is a passionate and polished speaker. But on Friday he was flummoxed when he was about to speak at the Conservative Political Action Conference (CPAC) in Maryland when the American Conservative Union (ACU) and the National Rifle Association (NRA) presented him with the Charlton Heston Courage Under Fire” award, an honor that is given with the presentation of a handmade replica of a Kentucky long gun.

However, ACU board member Carolyn Meadows said that he would have to pick it up later because the CPAC event does not allow firearms. It was clear that the award took Pai by surprise and he seemed to be at a loss of words, only saying, “Thank you,” seven times when the presenters appeared to be nudging him towards the podium  to make an acceptance statement.

The timing of the award may have been troubling for Pai since the NRA is coming under renewed scrutiny after the mass shooting in Parkland, Fla. that killed 17 people. In addition, on Friday the nation’s raw emotions were inflamed when they learned that multiple Broward County Sheriff’s officers displayed no courage under fire when they stood outside Marjory Stoneman Douglas High School while students were being shot to death inside.

Meadows told Pai that the courage award is sponsored by the National Rifle Association” in honor of the former NRA president, and it’s not given every year. It is only awarded “when someone has stood up under pressure with grace and dignity and principled discipline,” she said.

“We are honored to have you as part of this distinguished pantheon,” Meadows told Pai.

The achievement that helped Pai win the NRA courage award came in December when the FCC voted to eliminate net neutrality rules that kept providers from blocking and throttling Internet traffic and from charging online services for prioritization.