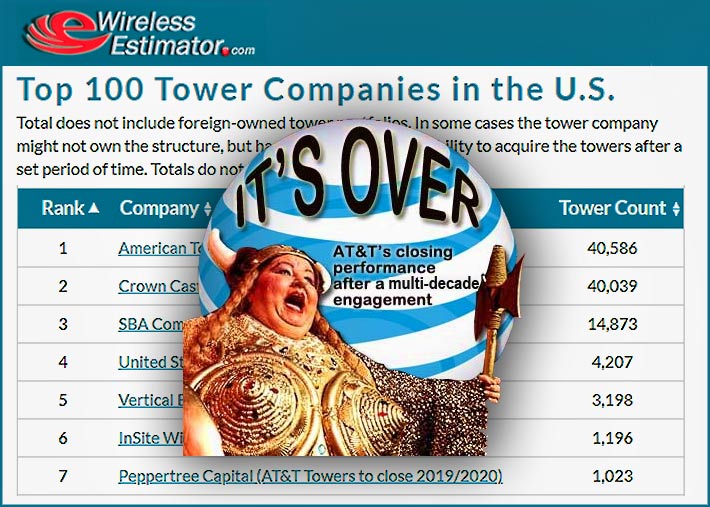 AT&T is selling its 1,000-plus towers to Peppertree Capital Management. Although TowerCo might be managing the assets, it’s not known which one of Peppertree’s operating companies will acquire them.

AT&T, the nation’s seventh-largest tower owner, slightly behind InSite Wireless Group, is exiting the business, selling more than 1,000 of their towers for $680 million to Peppertree Capital Management, Inc.(Peppertree) according to an announcement by the company preceding yesterday’s earnings call where Randall Stephenson, AT&T Chairman & CEO, discussed selling non-core assets.

AT&T will lease back capacity on the towers as part of the deal which is expected to see a tranche of towers closing by the end of the year and the remaining in subsequent closings.

Although Peppertree is acquiring the macro towers, it is unknown who the eventual owner of the structures will be, but according to an industry observer, TowerCo might be managing the assets.

Peppertree’s acquisition company, K2 Towers, might be the first owner of the structures

K2 has been acquiring towers over the years and reselling them. Their latest larger sale was to American Tower Corporation in October of 2017, according to FCC ownership change information that appears to represent close to 200 structures.

“Peppertree is an extremely sophisticated investor in the tower space and has multiple investments in operating tower companies. While it remains to be seen what they do with the AT&T towers, my belief is they will contribute these assets to one of Peppertree’s operating entities after the deal closes,” CTI Towers CEO Tony Peduto said.

According to Peppertree’s web site the private equity firm with more than $1B under management has made more than 80 investments in communications infrastructure companies in 10 countries since 2004.

Peppertree invested in Horvath Communications and in 2016, provided a $120 million funding commitment to Blue Sky Towers.

Earlier this year, TowerCo announced a newly-formed partnership created by members of the TowerCo management team and Peppertree.  As part of the transaction, TowerCo retained all of its assets and Peppertree committed an additional $300 million of equity capital to fund future growth. The majority of the TowerCo management team remained in place, however, Todd Boyer took over as CEO, replacing Richard Byrne.

Up until October of 2013, AT&T was the nation’s fourth largest tower owner before it sold approximately 9,700 towers to Crown Castle for $4.85 billion.