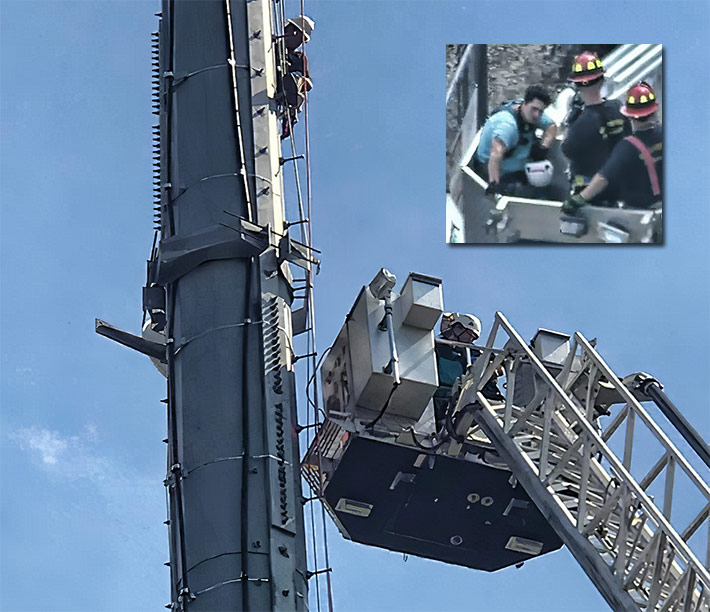 UPDATE: September 9, 2019 – According to individuals knowledgeable of Friday’s incident in Katy, Texas where a tower tech was rescued by firefighters, the technician at first thought that he was having a heart attack and firefighters immediately arrived at the scene following a 911 call. The tech was checked out at the local hospital for heat exhaustion and was released in the afternoon.

September 7, 2019 – Firefighters from the Willowfork Fire Department rescued a tower tech yesterday afternoon in Katy, Texas after the worker couldn’t climb down the monopole he was working on after he became dehydrated and started to suffer from heat exhaustion.

The Enertech Resources employee was with a co-worker on the tower when he was became ill from working in temperatures that reached 98 degrees, and a crew member called 911.

The fire department’s aerial truck was able to maneuver into position behind an office building off of Westheimer Parkway where the multi-tenant structure is located.

Firefighters were then able to rescue the worker who was physically shaken and was seen vomiting as he reached the ground in the truck’s man basket.

Many companies will advise their employees to immediately call 911 even if they have the capability to rescue an injured worker on a structure.

There was no rescue in place when firefighters arrived.

The monopole, less than 200 feet in height, is not registered in the FCC’s database.