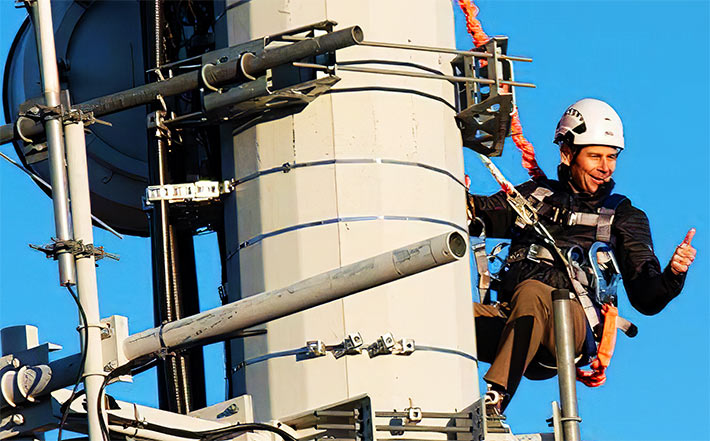 At age 60, U.S. Congressman John Curtis had no qualms about climbing to a sector platform on a monopole in Moab, Utah to learn about and appreciate the exacting and professional work that tower technicians perform in building out and maintaining the nation’s broadband networks

U.S. Congressman John Curtis (R-UT) yesterday conducted a site visit and climbing experience at a communications tower located in Moab, Utah. The tour was facilitated by representatives from NATE: The Communications Infrastructure Contractors Association and member companies Triple M Enterprises and VIKOR. The site visit was held at a Royce Electronics owned monopole site that is located in the Sand Flats region of Congressman Curtis’ Congressional District. 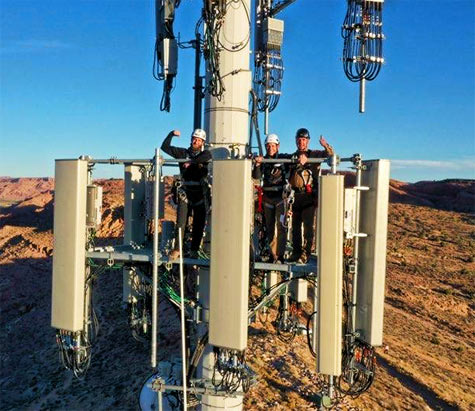 During the event, management and tower technicians from Triple M Enterprises and VIKOR visited with Congressman Curtis about the work they conduct on a daily basis building, installing and maintaining communications tower sites/broadband infrastructure while also shining a spotlight on the myriad of regulatory challenges confronting the industry’s ability to deploy infrastructure on federal and tribal lands. The highlight of the day was providing Congressman Curtis with the unique opportunity to experience a short tower climb under the guidance of safety personnel and tower technicians.

“The wireless industry plays such a critical role in our everyday lives,” said Rep. Curtis. “Understanding how we all stay connected and the equipment needed to make simple communications like text messages or a call to a family member is important in order to help us make further technological advancements and to develop the workforce needed to achieve these advancements. I really enjoyed this unique adventure today.”

“Utah is filled with some of the most beautiful places on the planet. Unfortunately they have limited connectivity due to federal regulatory hurdles making it tough to install wireless infrastructure,” stated VIKOR CEO Craig Snyder, whose company’s Orem-based regional office is located in Utah’s 3rd Congressional District. “Bridging the digital divide in wide open spaces of federal and tribal lands is of great importance to those suffering under the challenges of low connectivity. We’re very encouraged by Congressman Curtis’ desire to work at the national level in this regard, especially in places like Utah where so much land is federally owned,” Snyder emphasized.

“It was an honor to host Congressman Curtis today at the Sand Flats tower site. On behalf of NATE’s member companies in the 3rd Congressional District of Utah, we welcome the support of Congressman Curtis in his efforts to help bridge the digital divide on federal and tribal lands in Utah and beyond,” said NATE Wireless Industry Network Rocky Mountain Region Ambassador Chris Memmott from Triple M Enterprises in Nephi, Utah.