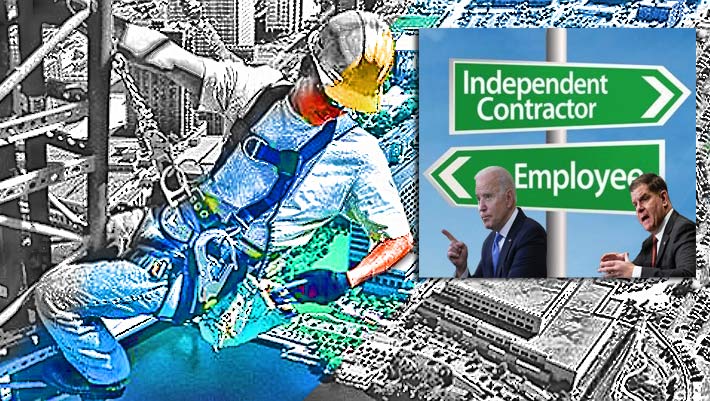 President Joe Biden is asking for $7.5 billion for worker-protection efforts – some of it going to the U.S. Department of Labor under Secretary Marty Walsh’s leadership, to root out misclassifications of 1099 workers

President Joe Biden’s 2022 budget plan released Friday highlighted his administration’s commitment to employment protection to workers who have been classified as 1099 independent contractors.

The budget calls for the U.S. Labor Department receiving $7.5 billion in the coming fiscal year to boost worker-protection efforts, including to root out misclassification.

“The administration is also committed to ending the abusive practice of misclassifying employees as independent contractors, which deprives these workers of critical protections and benefits. In addition to including funding in the budget for stronger enforcement, the administration intends to work with the Congress to develop comprehensive legislation to strengthen and extend protections against misclassification across appropriate Federal statutes,” the budget outline said.

The move could provide further tension between Biden’s administration and gig companies, such as Uber, that funded efforts to prevent the reclassification of their workers as employees.

It could also set the stage for curbing 1099 abuses in wireless and other construction industries.

Although there are some legitimate independent contractor situations where it is beneficial to the client and the individual, many contractors hire 1099 workers that should be employees since they are under constant supervision.

This is in conflict with the IRS’s Employer’s Supplemental Tax Guide that states: “The general rule is that an individual is an independent contractor if you, the person for whom the services are performed, have the right to control or direct only the result of the work and not the means and methods of accomplishing the result.”

Some companies will complement a crew with a 1099 worker. However, in an instance where the worker is under constant supervision and control, an industry attorney informed Wireless Estimator that a company could be imposed with large penalties for misclassification.

Fines are based upon whether or not the DOL and the IRS determine the misclassification was unintentional or intentional, or fraudulent.

True independent contractors are generally given a task that needs to be accomplished, a timeframe within which to complete it, and nothing else.

They do the task however they want, using their own tools and equipment, with no supervision by the company that hired them, a working model that didn’t appear to be in place when a high school student, paid as an independent contractor, fell from a New Jersey tower in 2019 and died.