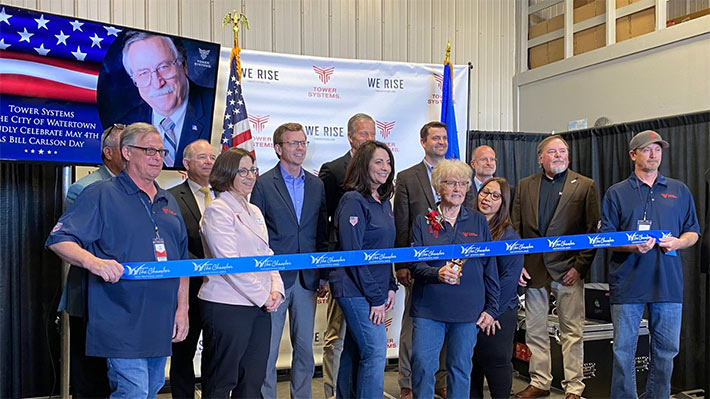 Lorraine Carlson, the wife of Bill Carlson, the founder of Tower Systems and the founding father of NATE, prepares to cut the Watertown Chamber of Commerce’s ribbon at the re-branding event held on Tuesday. Bill passed away March 25, 2019. The City of Watertown, SD proclaimed May 4th as Bill Carlson Day. 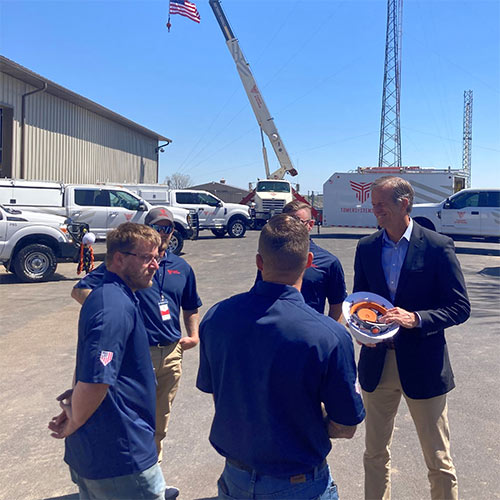 U.S. Senator John Thune said, “Over the years, I’ve had the opportunity to visit with the men and women installing and maintaining broadband infrastructure across South Dakota to enable greater connectivity and I appreciate all they do.”

“We are thrilled to shine a spotlight on the hard working people who make Tower Systems possible and to give recognition to an industry that is connecting people around the globe with the technology of tomorrow,” said Kari L. Carlson, Tower Systems President & CEO.

Speakers honored  the history of Tower Systems and the large role South Dakota plays in advancing 5G technology and deploying important broadband initiatives. Company representatives rolled out a new corporate brand designed to communicate the mission, vision and values of Tower Systems. The new brand positioning line “We Rise” speaks volumes about the family-owned operation, serving both as a salute to the past and a mantra for the future.

The event, and the day, was dedicated to a maverick in the industry and founder of Tower Systems, Inc., Bill Carlson, who passed away in 2019. Carlson’s vision, innovation and hard work allowed him to blaze trails in the industry as a co-founder of NATE.

In applauding wireless workers, Commissioner Carr said, “What people lose sight of is that this is real work. This is a real infrastructure effort. It takes work to have the leading broadband networks that we have in this country, and it’s thanks to all of you.”

“It is appropriate today that we focus on the continued rising of Tower Systems. You are not making this trip alone. You are taking so many of us with you,” Johnson said.

Tower Systems, was established in 1975 as a family-operated business headquartered in Watertown with a division in Winter Park, FL and a satellite office in Angle Inlet, MN. The company has 57 employees across the nation. It’s rebranding video is below.