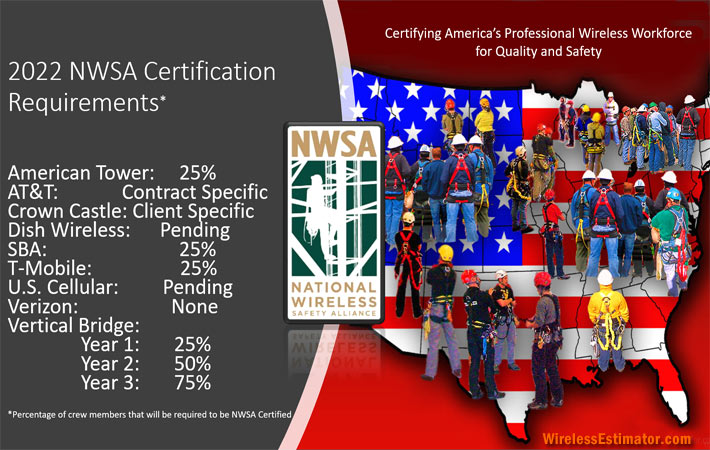 Attendees at NATE UNITE 2022 were provided an executive level overview of how field personnel will be taking control of their future as the wireless workforce becomes increasingly dependent upon new skillsets that will be required of technicians. 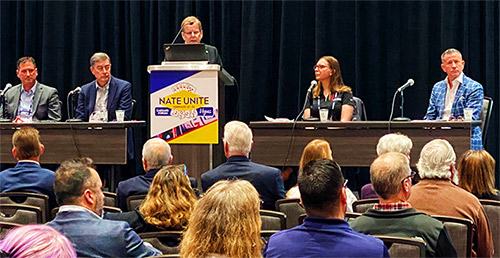 NWSA dovetails into technicians taking control of their future

It was acknowledged that a key industry benefit for field personnel and companies was the Telecommunications Tower Technician I and II certifications provided by the National Wireless Safety Alliance (NWSA).

Emphasizing the importance of worker certification, Wireless Estimator Publisher and moderator Craig Lekutis said the 2022 NWSA certification requirements for 2022 by carriers and tower owners identify that the industry is serious about requiring a set percentage of crew members on site to be certified.

Walters aid that AT&T’s requirement is contract specific, but it is believed that the carrier requires its turfing vendors to meet a goal of 50%.

Ciarfella said that SBA is currently at 25% but would be reviewing that number in the near future.

It was pointed out by all panelists that NWSA is a non-profit trade certification organization for individuals who work in the telecommunications industry, and they emphasized it does not perform training or issue training certifications, stating that the actual training pathway for workers can be from a variety of other sources, such as employers, training companies, or educational institutions.

At times, that message is misaligned on social media. In recent posts, one tower tech said he took the NWSA training, and it was “worthless,” but it was apparent he didn’t since NWSA only provides certification. Another said, “It’s not for the worker,” although NWSA was solely established to benefit the technician through a greater safety awareness and increased skill knowledge.

The panelist said that it was difficult to engage with persuasive arguments, and perhaps an alternate route would be to personally contact the individual and explain the benefits of NWSA.

Although there have been no reports of forged NWSA wallet cards, it was announced that new cards in the near future will contain a holographic watermark. It was also stressed that there is an ethics and discipline appeals process in place to ensure accountability at all levels of the certification process.

Testing results as of the end of 2021 identified that the failure rate for the TTT-1 written test was 27% and the TTT-2 at 49%. However, the failure rate incurred during a practical examination showed a lower an more balanced rate of 18% for TTT-1 and 15% for TTT-2.

In 2021 there were 18,223 TTT applications and 16,832 tests administered, and 11,711 passed. Although only 4,564 certifications were issued during 2021, it was noted that there is a lag between the test-taking and the practical examination that contributes to actual certifications issued.

There are over 8,000 card-carrying communications workers

That total in the past two months has seen a marked improvement. In addition, the ability for candidates to apply online for a practical exam now takes only minutes using NWSA’s new system. There are currently 269 active practical exam test sites throughout the country.

Other programs in the development cycle include Tower Construction (Stacking), Small Cell & DAS Systems Technician, Fiber Optic Technician, Civil Technician, as well as others as needed.

NWSA’s November announcement that there is documentation that NWSA certification dramatically reduces safety incidents was discussed and the 3-to-1 decrease in tower crew-related safety issues was emphasized.

What’s in Your Wallet?

The industry is undoubtedly aware of the ubiquitous Capital One ad campaign beginning in 2000 featuring celebrities asking that now-famous question, “What’s in Your Wallet?”

Eleven industry professionals were proud to identify what’s in their wallet,  their TTT certification card, in the NATE UNITE 2022 session. Their comments can be viewed in the presentation download available here. 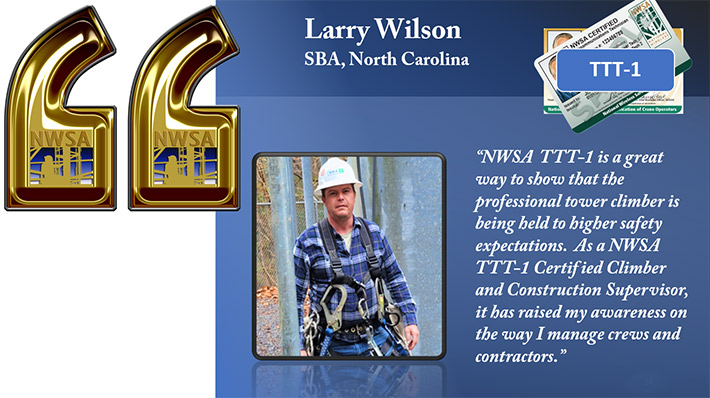