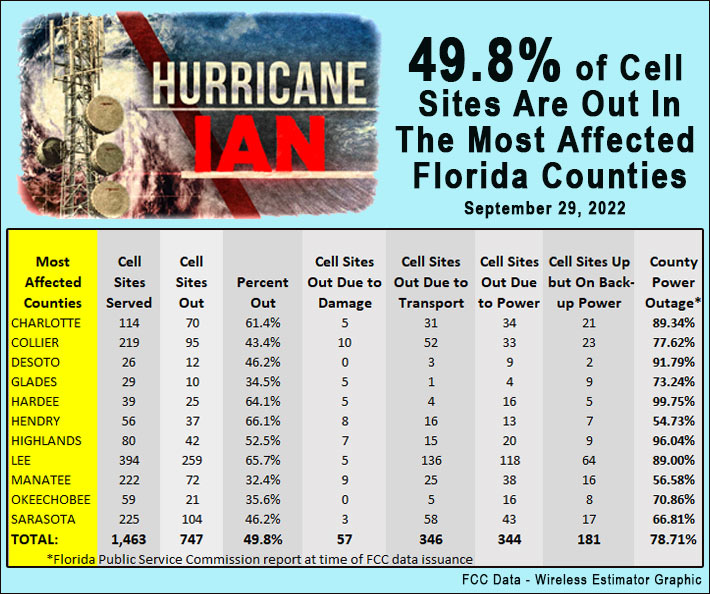 “This could be the deadliest hurricane in Florida’s history,” President Joe Biden said at the Federal Emergency Management Agency headquarters in Washington on Thursday regarding Hurricane Ian.

“The numbers are still unclear, but we’re hearing early reports of what may be a substantial loss of life,” Biden said.

Although there have been 21 confirmed deaths reported, the deadliest hurricane on record for Florida, according to NOAA, was the 1928 Okeechobee hurricane, wherein more than 2,500 people died.

Biden’s remarks have caused grave concerns for people who cannot reach family members and loved ones since cell service is nonexistent in many areas where Ian decimated homes and businesses. And in many locations, access to emergency services has been cut off.

Although media outlets cite yesterday’s FCC report identifying that 10.9% of Florida’s affected counties’ cell sites are down, the statistic belies the actual outage for the most affected areas above 20 percent, where the average cell site outage is 50%, with multiple counties averaging 65%.

The FCC’s average includes all Florida counties, many (see graph below) that have minimal or no outages being reported by carriers.

The11 most affected counties have widespread grid outages from 55% to 100%. While power restoration efforts have begun in some areas, hard-hit counties like Hardee are still without service. Yesterday at 9:00 a.m., the Florida Public Utilities Commission identified that 99.75% of Hardee’s communities were without power. This morning, it is still a staggering 99.66%.

The continued lack of power may increase Hardee’s cell site outage from 64% to a higher percentage today.

Verizon said yesterday that they were engaged in a massive refueling operation to keep their generators at their cell sites and network facilities running for their customers until commercial power is restored.

“Our engineers are confident we have the fuel and crews we need to keep that operation running 24×7 until that happens. Additional generators are being imported from surrounding states,” the carrier said in a statement.

AT&T said they are working to help the people affected by Ian.

“To assist in the recovery, we’re now welcoming other carriers’ customers to roam on our networks so they can connect, even if their carrier’s service isn’t available after the storm. Once this roaming begins, customers will automatically be connected to our network,” the company said yesterday.

T-Mobile also made a similar announcement to provide unlimited connection to customers in affected areas until October 3.

Although a county could have 65% of its cell sites down, that does not necessarily reflect a similar reduction in cell service since networks are often designed with numerous overlapping cell sites, and carriers might have mobilized temporary infrastructure. Also, roaming agreements can provide assistance in some areas.

Ian has knocked six TV stations, six AM radio stations, and 15 FM stations in Florida off the air.

Damage is throughout Central Florida

Central Florida didn’t see severe structural damage from Ian as it became a tropical storm, but trees were upended, and torrential rain flooded many communities.

The Orlando area received over 20 inches of rain, causing major flooding in communities that previously weathered other severe storms.

One of those rescues was the family of Wireless Estimator marketing manager Alyssa Peeples. They were rescued by emergency personnel as their Orlando home’s first floor became engulfed in water.

To fully prepare companies who may potentially be tasked with working in areas impacted by Hurricane Ian, NATE: The Communications Infrastructure Contractors Association is providing an Access Coordination Request letter from the Cybersecurity and Infrastructure Security Agency (CISA).

Multiple contractors have informed Wireless Estimator that they are still on standby to assist with carrier refueling efforts and maintenance issues. 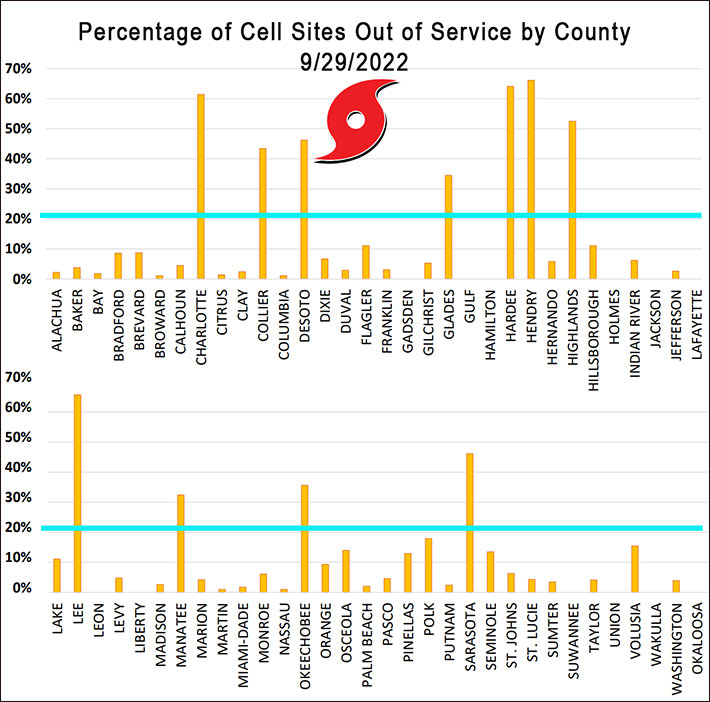