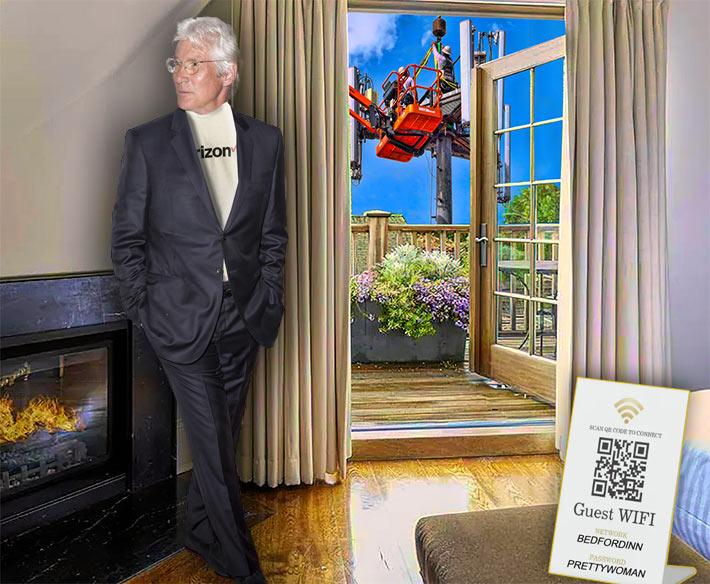 WAITING FOR MR. GOOD (four) BAR(s) star Richard Gere is allowing Verizon to erect a cell tower on the property of his rustic chic eight-bedroom Bedford Post Inn that charges up to $1,000 per night in season in Bedford, NY. The 130-foot monopine will surely not be visible to guests from their balcony but will be tucked away on the inn’s 14 acres. However, wealthy area residents said it will be in their faces and are protesting its installation. Bedford’s planning board reviewed the application with additional findings last night and will most likely approve Verizon’s special use permit at a January 9 session.

The planning board of the Town of Bedford, NY, appears to be ready to approve a 130-foot monopine on the grounds of Richard Gere’s tony Bedford Post Inn.

Gere and real estate developer Russell Hernandez have offered land on their 14-acre estate for a Verizon cell site to fill service gaps for emergency responders in town. 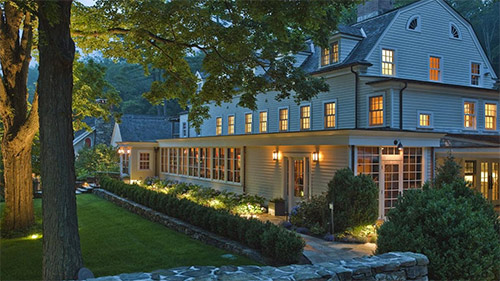 Richard Gere has been the co-owner of the inn and property with real estate developer Russell Hernandez since 2009.

Wealthy residents Rooney and Kate Mara and Carolyn Liebling, sister of Jerry Seinfeld, and others have been vocal about the site’s location, citing unfounded concerns that their home’s property values will be affected.

However, at last night’s planning board meeting, Chairman Deirdre Courtney-Batson said that there has been “no evidence presented in the record that it would affect property values.”

She also outlined the tower’s benefits to residents and first responders and that it met the fall factor and all other requirements.

Although many residents presumed it would be headed for approval at the meeting, Courtney-Batson opened the session stating there would be no public comments and the board “will not be voting tonight.”

The board will discuss the application again on January 9. 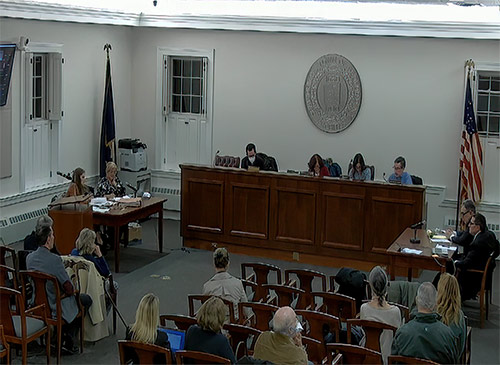 Few residents showed up at last night’s planning board meeting to register their concern about greenlighting Richard Gere’s 130-foot Verizon monopine. The town of Bedford is known for its wealthy celebrities, such as Ralph Lauren, Blake Lively, Ryan Reynolds, and Matt Damon. Just up the road in Katonah are residents Martha Stewart and George Soros.

During a December 19, 2022, board meeting, resident Roxanne Spruance, who co-owns the Inn’s Michelin-rated restaurant, The Barn, said on the video, “This will be right outside my living room window. And we’ve all been to places with construction projects going on. It sucks.”

Courtney-Batson didn’t specifically address Spruance’s comments but said last night that the nearest residence was 850 feet from the site, and residents further out had a minimal view of the monopine.

Not in my backyard windows and new technology exposed

As expected, when NIMBY homeowners protest, exaggerations or misstatements are frequently made. For example, a Paddock Lane resident informed The Post that the proposed tower would be visible from nearly every room inside his $2.5 million home.

Well, not every room; the only windows facing the tower are in the rear of his home, according to Google maps. And it’s possible that he might not be able to see the monopine since his backyard and adjoining acreage are heavily wooded, and the site is at least 3,200 feet away.

Kathleen Rooney Mara, whose family owns the Pittsburgh Steelers, added a questionable insight into future wireless technology, saying a much less intrusive cell tower is the only path forward, noting the structure will likely be replaced by satellites in the future due to advances in wireless technology.

Her erudite announcement, to date, hasn’t resulted in a substantial sell-off of towerco stocks.

On April 27, 2021, Verizon filed a lawsuit against the town, stating that it had sought approval to construct a 115-foot cell-site flagpole. The carrier later submitted a second application for a location suggested by the town to build a 150-foot monopine. The town denied both applications.

Gere and Hernandez were approached by Bedford Town Supervisor Ellen Calves in June, asking if they would offer land on their estate for the tower, according to Calves. However, the new location application has put the lawsuit on hold.