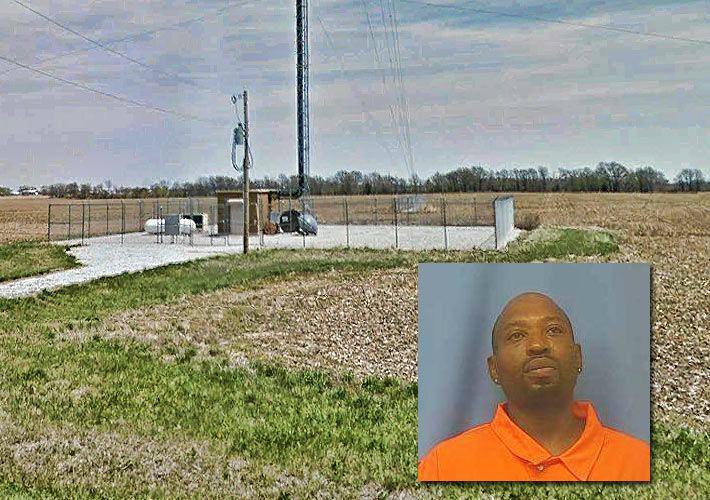 Wendell Ragsdale, 46, is one of three Illinois residents who have pleaded guilty to stealing copper from over 80 cell towers in Missouri and Illinois, such as this U.S. Cellular guyed tower in Thomson, Missouri

An Illinois man pleaded guilty Wednesday to a federal charge accusing him of shutting down power to more than 80 cellphone towers across Missouri and Illinois to steal copper from the sites.

He was arrested in Pike County, Missouri when a County Sheriff’s Office deputy saw the lights go out on a guyed tower near Eolia, and was indicted on September 12, 2019 (view indictment and theft sites).

Wendell Ragsdale, 46, is one of three Illinois residents who have pleaded guilty to a conspiracy charge in the case.

Christina Weaver and Taylor D. James have pleaded not guilty.

As reported last September by Wireless Estimator, the Illinois residents were indicted, and in addition to the U.S. Attorney’s Office, the Missouri State Highway Patrol and Homeland Security were also assisting in the investigation.

The thefts of ground bars and other onsite copper occurred between April 3, 2018 and Aug. 2, 2018. Ragsdale and Warren cut power to the cell towers so that they could remove copper wiring and grounding bars, according to plea agreements.

Charging documents state that while investigating a series of copper thefts, Pike County Sheriff’s Deputy Joe Minor spotted a cell tower’s red warning lights go out on Aug. 2, 2018, and caught James driving away. Minor and another deputy then caught Ragsdale and two others.

The ring cut padlocks or fences to get into the areas around the cell towers to steal the copper, the charging documents said. Most of the sites were in rural areas where they could not be easily observed.