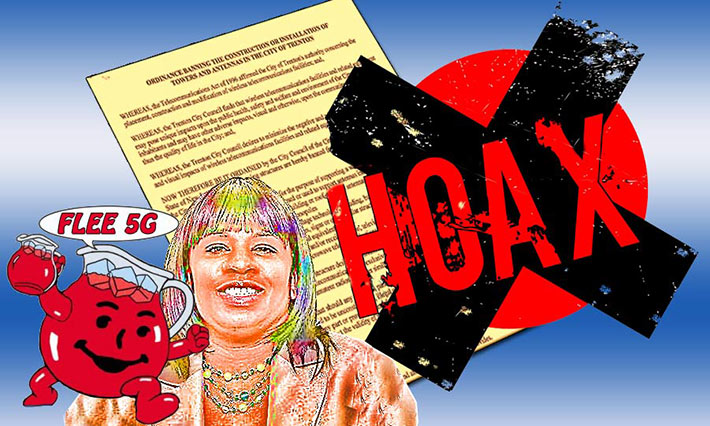 Joining the Kool-Aid 5G conspiracy crowd, Trenton, New Jersey City Council President Kathy McBride appears to believe 5G is dangerous and shares hoaxes on her Facebook page. Prompted by health concerns, she and other council members provided a draft ordinance to ban all new towers and antennas in the city of 85,000 residents

Trenton, New Jersey City Council President Kathy McBride appears to easily accept a hoax and her most recent foray was falling for a 5G conspiracy deception along with other city council members that reportedly prompted them to draft a proposal (below) banning the construction of towers and antennas in New Jersey’s Capital, according to the Trentonian.

A letter from a city resident appears to have fostered local leaders’ concerns and prompted them to write the draft legislation after they allegedly received correspondence dated April 6 warning that “wireless providers are using the COVID-19 emergency as cover to expand and cement their rapid and virtually unsupervised deployment of harmful wireless infrastructure.” 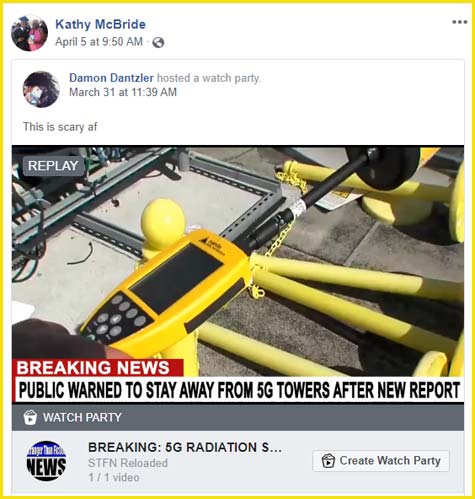 McBride shared this video, one of multiple conspiracy items on her Facebook page

The correspondence echoes recent internet chatter that sparked arsonists to set fires at cell sites in the UK.

McBride, told the newspaper that she had not seen the letter and that there had been longstanding concerns about plans for a new telecommunications towers in Trenton.

But McBride’s Facebook page, however, shows that she frequently shared posts that perpetuated the conspiracies about 5G technology.

In 2013, McBride was fooled by a “Blue Waffle Disease” hoax while serving on the council.

During a meeting she said, “It is a disease that’s already claimed 85 lives and it is a case here in the City of Trenton.” She said the disease is supposed to be a virus that is 10 times greater at this point than the AIDS virus.

A quick internet search by McBride would have found that it is a fictional sexually transmitted disease.

McBride came under fire last September when she used an anti-Semitic slur to describe the negotiation tactics of a Jewish city attorney, during a closed session meeting.

“They were able to wait her out and jew her down,” McBride said, according to a recording of the meeting