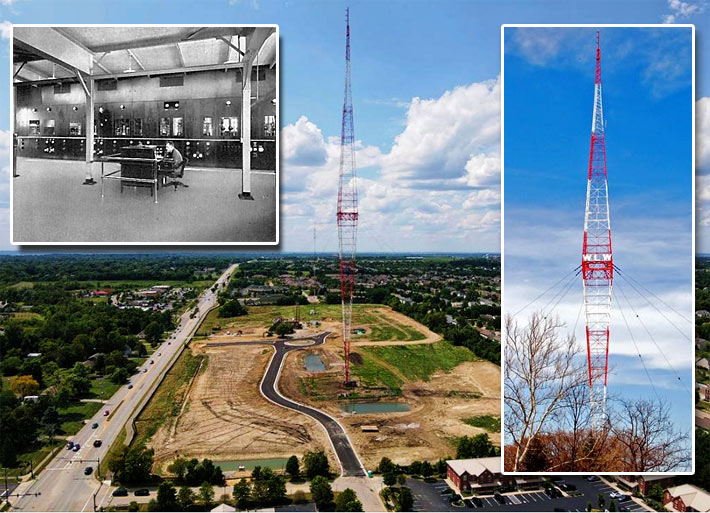 Site development for Tower Park is under way around the 32-acre mixed-use complex’s center attraction, Vertical Bridge’s Blaw-Knox tower that transmitted WLW’s 500,000-watt signal in 1934. The station’s transmitter was 54-feet wide, 13-feet tall and 7-feet deep. A nearby pool with distilled water was used to cool 22 glass radio tubes that were 5-feet tall. The two base insulators, with walls less than two inches thick, support a stress load of 900,000 pounds.

The iconic Blaw-Knox diamond cantilever shaped tower in Mason, Ohio, owned by Vertical Bridge, was the first and only AM structure to broadcast its WLW-AM 500,000 watts signal from coast to coast, and it will remain standing tall and cast its history on the restaurants, office buildings, public storage buildings and other businesses being built around it. 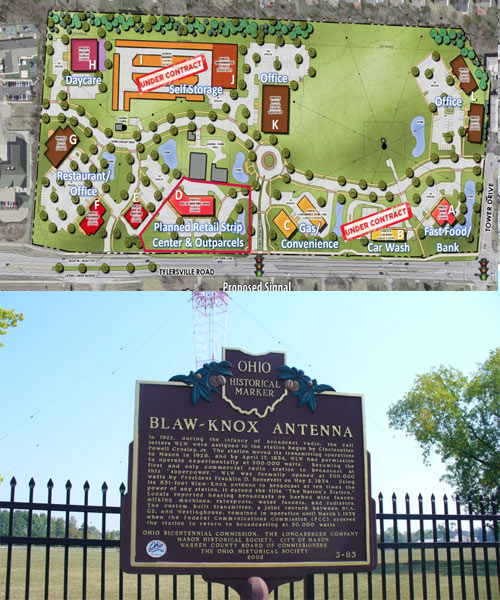 Tower techs providing maintenance on the WLW Blaw-Knox tower will not have far to go for gas and food or getting their crew cab washed. It is likely that the anchors will be heavily protected from vehicles and the AM radiator’s grounding system will be modified.

Broadcasters will sometimes sell off their multi-acre site when the property is worth more than the structures, such as when Cumulus Media sold off its 75-acre Bethesda, Md. four-tower site last year for $74.1 million.

Towercos also take advantage of selling off large acquired properties to developers if they can obtain a favorable long-term lease for their towers, especially if relocation would be too costly or prohibited by zoning issues.

This is a common practice for Vertical Bridge, a company spokesperson said, regarding the 32-acre Tower Park Development site that is now being developed by Lee & Associates into a $30 million mixed-use complex along heavily traveled Tylersville Rd.

In 2015, iHeartMedia, WLW’s corporate owner, sold an undisclosed group of its radio towers to Vertical Bridge for approximately $400 million.

WLW-AM will continue to broadcast from the Blaw-Knox tower and the transmitter building which in 1934 housed the United States’ one-of-a-kind 500,000 watts transmitter on an experimental basis.

President Franklin D. Roosevelt activated the transmitter on May 2, 1934 from the White House. With a signal 10 times more powerful than any other U.S. broadcaster, “The Nation’s Station” broadcast programs almost coast-to-coast for five years, renewing their license every six months, until the FCC ordered it to return to broadcasting at 50,000 watts.

According to an Ohio Historical Marker that was placed at the transmitter site entrance, residents “reported hearing (WLW) broadcasts on barbed-wire fences, milking machines, rain spouts, water faucets and radiators.”

It was also widely reported by residents that the signal was so powerful that homeowners would see their lights flicker in time to the modulation peaks of the transmitter as well as hearing WLW radio on the metal coils of their mattresses and boxed bedsprings.

The 200-ton tower was originally 831-feet tall but was reduced to 739 feet after at night it was found to cause cancellation issues.

The Mason Blaw-Knox tower is one of six still used today by U.S. radio stations. It has one set of eight guy wires at the 35-foot-wide center of the structure.

The video below provides an enjoyable and educational insight into the history of the WLW tower.