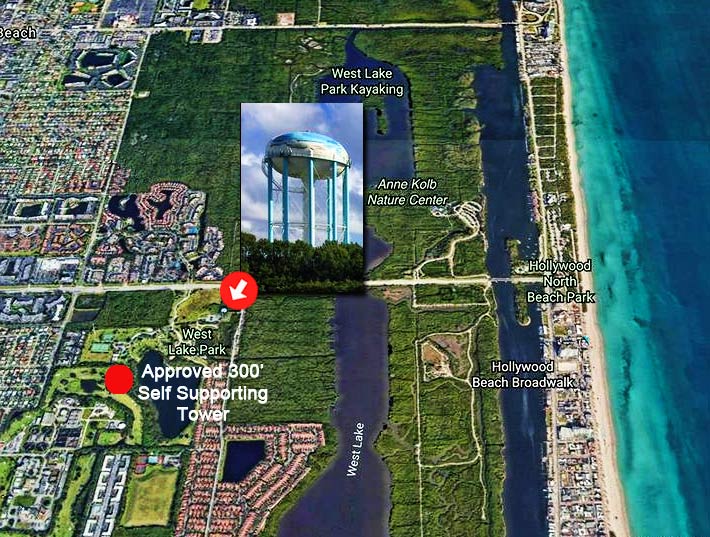 For almost three years, Broward County, FL has been attempting to upgrade their communications system with a new tower in a county-owned park. Aesthetics played a role in the City of Hollywood trying to find an alternate location, even though there is a water tower in the park and a nearby cell tower that appear to be acceptable utilities.

Broward County, FL Commissioners had been criticized for not moving faster to replace the county’s old and overloaded communications system that reached capacity in 2001 — a network that was crippled during the Fort Lauderdale-Hollywood International Airport shooting in 2017 and the Parkland school shooting the following year that killed 14 students and three staff members.

In June of 2017, the commission had awarded a $59.5 million contract to Motorola Solutions, based upon its August 17, 2016 proposal to upgrade the county’s public safety communications system with a new 700 MHz, P25 Phase II trunked, simulcast system that required 16 retrofitted and new towers.

Project will be three years behind schedule

The county said it anticipated having the entire P25 system installed by December 2018. However, it looks like it will be about three years behind schedule.

Six new tower sites were given approval to be built, and the final tower, a 300-foot self-supporter at Broward County-owned West Lake Park in Hollywood was protested by city officials in response to local residents’ aesthetic and inaccurate concerns regarding safety and property values.

On Tuesday, after years of meetings and hearings, county commissioners finally approved the West Lake Park site. Still, it will be many months before the structure is built, a tower that provides additional coverage to the airport less than five miles north of it where five people were killed while six others were injured in the 2017 mass shooting as deputies tried to use their inadequate communications system.

Moved by their residents, Hollywood officials didn’t want the tower built in a park known for its kayaking, mangroves and natural areas and offered up the Circ, an apartment and hotel complex on Polk St. whose management said they would provide a very favorable lease rate and wanted to work with the city and county, as reported by Wireless Estimator a year ago.

The county hired Raleigh, North Carolina-based KCI Technologies to review the Circ site, and in a January 21, 2019 report, P.E. Eric Kohl said in his summary, “My overall recommendation is that this site NOT be utilized for this project, particularly when compared to a new tower location specifically designed for the new system. The site can be made to work, but it will require extensive construction efforts and will have several potential long-term challenges, in particular, maintenance related.”

During an April 2019 county workshop it was stated that it would cost between $2.1 million to $2.8 million to construct the microwave system on top of the Circ, and that did not include any additional structural retrofitting and delay costs.

The independent consultant said the West Lake Park location was a better choice than the Circ apartment and hotel complex.

In an independent expert comparative report released last August by Monetti & Associates, Monetti states: “After a thorough and careful analysis of all the data, interviews, site visits and based on our expert experience, our determination is to proceed with the WLP [West Lake Park] site deployment. We find this to be a very firm conclusion; even if cost is not considered there are many strong advantages to WLP over CIRC.”

Both the county and city agreed that the consultant’s decision would be binding.

So why did it take another eight months for the county to approve the site when they were aware of the need to offer adequate coverage, especially since hurricane season will start June 1?

Apparently, the county and the city had to agree upon a land swap due to deed restrictions on the park property that was donated to the county, a requirement that was never discussed over the years as a possible impediment.

NEPA could be another roadblock

It is also unknown if the county ever received a finding of no significant impact by NEPA, a process that typically takes 45 days or longer.

Motorola, in a report to the county, has projected that once they are provided with a notice to proceed it will take more than five months before the West Lake Park tower and equipment is operational within the new network.

Nearby residents were the most vocal, championing over the years the usual suspect reasons for not having a tower.

A key concern was that the tower would not be safe during a hurricane and could easily collapse.

Monetti’s report said it would withstand a Category 5 hurricane, and the closest home is at least a quarter-of-a-mile away from the site.

Hollywood residents love their fat tower versus a thinner taller one 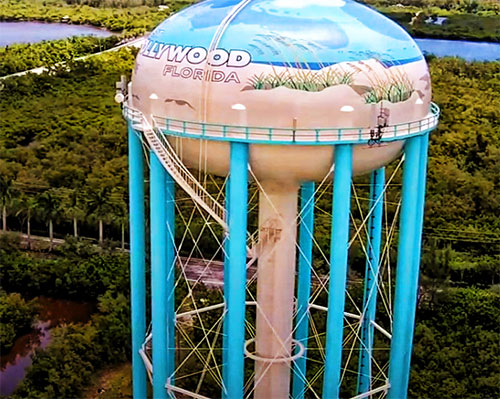 This 159-foot water tower in West Lake Park with what appears to have a wireless tenant on it is acceptable, but residents are concerned that a thinner taller sister structure providing emergency communications designed to save lives in their neighborhood will soil their sky.

In regards to residents’ concerns that the tower would decrease property values, Monetti said that there is no evidence of data to support that concern, noting that the West Lake Park’s site has a nearby 150-foot cell tower.

In the park there is also a 159-foot standpipe water tower near the approved location that has been there for 63 years that is approximately two to three times wider than the proposed communications tower.

Ironically, a WPLG-TV reporter did a live shot at West Lake Park following the county’s approval, extolling the park’s beauty that would be violated by the tower as she was partially framed in the background by the water tower, another universal utility whose well-fleshed legs and mammoth girth are painted with pride by the city to highlight it.