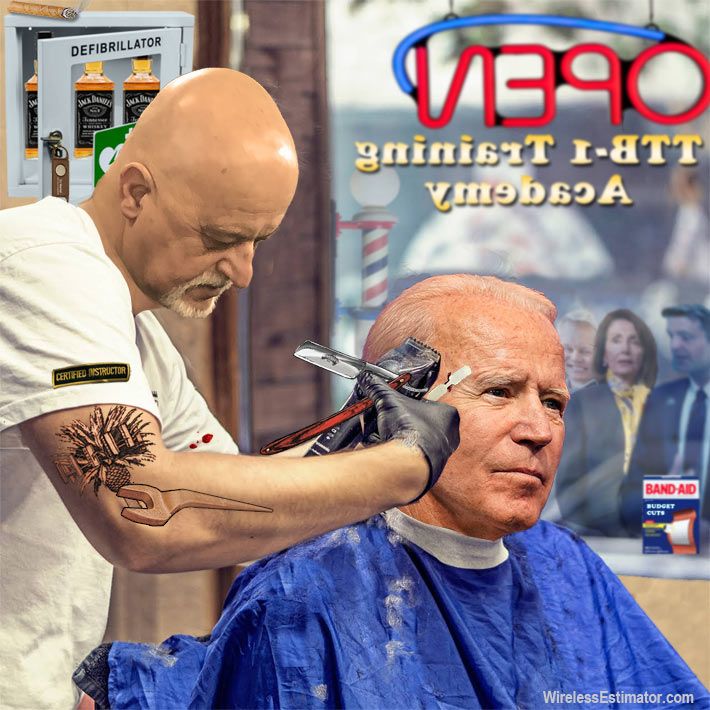 FROM SPUD WRENCHES AND WINCHES TO RINSES – Illinois safety professional Steve Wilder has the honor of being the first National Wireless Safety Alliance TTB-1 graduate certifier who can instruct wireless workers to obtain NWSA certification that will allow them to supplement their income if federal funds for broadband aren’t released. (Enlarge)

However, the White House did not say how they plan to move the package through congress, nor provide a timeline on when they want it passed.

Republicans also have numerous bills to assist in rolling out broadband with results that will boost construction spending and benefit  contractors and wireless workers.

Unfortunately, it could be a year or more before it’s available and the National Wireless Safety Alliance (NWSA) has taken a proactive approach to assist wireless workers in case funding is slowed due to the glacial speeds that bills take to be enacted.

“It’s an excellent way to support your family if work dries up,” said NWSA Executive Director Duane MacEntee, who discussed the transformative certification with Wireless Estimator. “And even if you’re busy on the road, it’s a great way to earn extra money coiffing your crew members who are just too engaged with their work to visit a barber,” MacEntee added.

Tower foreman Emmett T. Wittlinger said he was busy now with Dish Network installations, “but you never know,” he stated, adding that he was going to train and get TTB-1 certified just in case.

“President Biden shut down the Keystone XL pipeline with an executive order and lots of well-paid people were put out of work. What if he cuts off the broadband pipeline because he listens to a bunch of woke loony Luddite lobbyists who say it’s not necessary? Go figure.”

And what days is April 1?

In a world still turned upside down by COVID-19, Google said  it would forgo its annual ritual of sharing April Fools’ Day jokes across the company’s pious platforms for the second year in a row. Most brands gave 2020 a pass but many are back this year. We’re not tone-deaf and insensitive but believe that laughter can be a helpful remedy. Humor can be a great safety valve during these trying times that are thankfully improving. Wireless Estimator hopes that we’ve provided you with a mild smile with our seventh year of celebrating April Fools’ Day.