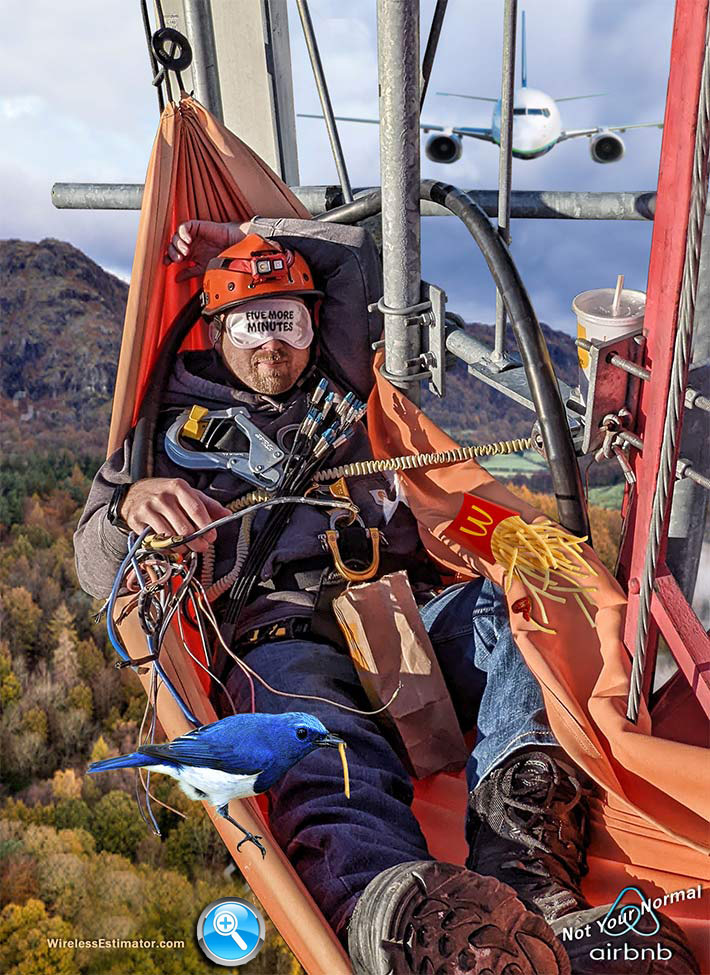 AT&T informed their turfing vendors yesterday that an experimental practice of allowing contractors to reduce their OPEX by permitting their tower crew members to sleep overnight on site on the sector of their choice, is now permanent. The FCC and FAA have assured the nation’s tower techs that they will not have to be concerned about 5G interfering with aircraft navigation that could interrupt a well-deserved good night’s sleep. (ENLARGE)

An organized work stoppage action by U.S. wireless contractors that could have exceeded the breadth of economic damage caused by the steel workers strike of 1919, that shut down the nation’s steel industry, was averted yesterday after carriers and tower owners offered concessions to offset untenable matrix pricing being offered for 5G installations. 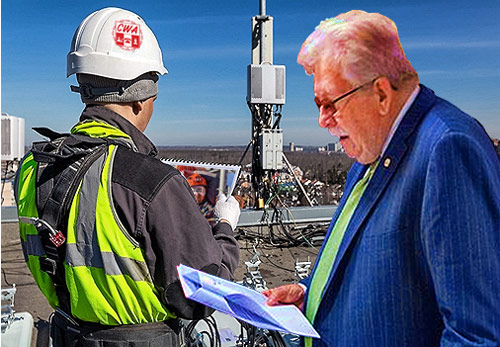 UPSET UNION CHIEF UTTERS THE “F” WORD – “I am absolutely flummoxed,” said Communications Workers of America (CWA) President Christopher Shelton (at right) after reviewing an advance copy of the industry concessions carriers and towercos made to wireless contractors to head off a strike. “This just ain’t right. The CWA should have collectively bargained for this, not some small rag-tag roustabouts. Double dagnabbit!  This doesn’t bode well for our union organizing efforts. I was a technician in the late ‘60s and would have loved to have been able to sleep in a New York Telephone office overnight like we were often caught doing during the work day since it was a protected perk negotiated shortly after we were founded in 1938,” said Shelton.

The call to action for a national strike to begin on Monday, had been orchestrated by the over 2,063 member companies of NATE: The National Association of Tortured Entrepreneurs, a trade group that has been talking with Tier 1 clients to adjust ‘take it or leave it’ pricing that is resulting in contractors closing their doors.

A spokesperson for AT&T, who requested that his name should not be used because he was already drowning in his own pool of embarrassment, said that the carrier’s CAPEX trumps contractor OPEX, but AT&T has offered contractors, “a positive, albeit giddily weak” alternative to assist with their withering income by allowing them to reduce per diem expenses by permitting tower techs to bivouac overnight at their base station locations throughout the nation.

Additional national carriers are also championing AT&T’s contractor enhancement because towercos have agreed to allow workers to spend the night in their compound since they believe they can benefit from an increased tenancy rate per structure, a move that is being  hailed by financial analysts.

Verizon said that accommodating contractors for higher meal and lodging costs wasn’t an acceptable concession, but on-site hammock housing was an appropriate action.

In a statement, a spokesperson said, “Begrudgingly, we’re in agreement with overnight stays to allow tower technicians to enjoy low-cost, back-to-nature immune-boosting, and stress-relieving sleep that has proven to increase circadian rhythms while decreasing per diem.”

“Where else in America are you able to wake up to the caw of ravens and be ready to work within literally minutes, and even possibly right at your previous day’s work station elevation?” the press statement added.

T-Mobile announced today that it has provided an alternative approach, stating that in lieu of providing contractor increases for matrix pricing during inflationary times, the carrier will be allowing their tower techs installing and maintaining their network, to stay overnight in the nearest T-Mobile retail location on every other promotional T-Mobile Tuesday. 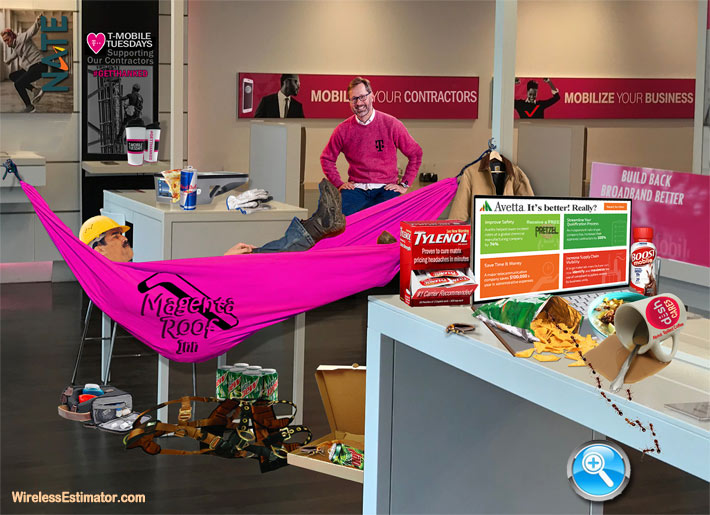 THE UN-INNKEEPER – T-Mobile CEO Mike Sievert was on hand to offer a humane journey into the waking world to tower technician Clayton T. Wittlinger with restorative music and aromatherapy diffusion following the carrier’s first Tuesday night sleepover in Canton, OH. As Wittlinger struggled for six minutes to get out of his T-mobile-provided hammock during the press conference, Sievert took the opportunity to explain in a detailed technical presentation how T-Mobile would thrash Verizon in the upcoming 2.5 GHz auction. “So, Verizon is a carrier in the U.S. Verizon exists next to another carrier called T-Mobile. T-Mobile is a bigger 5G carrier. T-Mobile is a powerful carrier. T-Mobile decided to conquer a smaller 5G carrier called Verizon. So, basically, that’s not wrong,” said Sievert who then began to gingerly hand-feed Wittlinger bits of a honey butter chicken biscuit left over from a midnight snack. (ENLARGE)

“Although Charlie [Ergen, Dish Network Chairman] asked me to study this supply and demand thing that we’ve just heard about, we’re introducing today a new product that will make our cell site installations for our aggressive deployment a lot easier for contractors, saving them money,” said Dish Network Development EVP Dave Mayo during a tower panel discussion on Tuesday at the Nashville South Wireless Summit.

“We’ve always dreamed of a plug and play environment, no return visits, and the ability to reinvent a lower cost structure through contractor financing and support, and it has arrived today,” said Mayo. 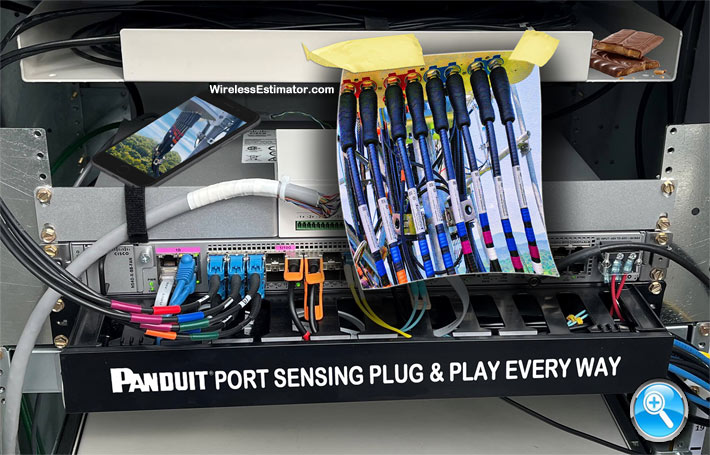 Highly skilled tower technicians have had the onerous task of ensuring that dozens of antenna connection ports’ jumpers were properly installed and color coded, a procedure that required diagrams, photographs and video coordination. Panduit’s Port Sensing Plug & Play Every Way will now allow them to adopt a ‘good enough for government work’ ethic that will not have their company compensating Dish Network for tiger team remediation visits. Panduit’s equipment now opens up opportunities for techs to form an LLC after three months of experience, assuring carriers of an adequate workforce and the ability to demand further reductions in matrix pricing. (ENLARGE)

**CORRECTIONS: An earlier publication of this article incorrectly stated that T-Mobile was opening up its retail locations to tower techs for overnight lodging on T-Mobile Tuesdays. It has been corrected to read “every other promotional T-Mobile Tuesday.” Also, it was reported that Dish was having diversity balance issues on ports with the new Panduit equipment. That is not correct and we have removed that statement, which is good because other than it allowing the article to appear to be highly technical, none of our staff had any earthly idea what it meant or how phones can talk to each other. In addition, Airbnb’s statement that it had an agreement with Vertical Bridge to represent their towers was premature, according to a DigitalBridge representative. Wireless Estimator regrets the errors and will vigorously provide the information and documents from sources that were previously provided anonymity in any lawsuit that might be lodged against the website.

In a world still turned upside down by the  uncertainties of COVID-19, the war in Ukraine, high fuel prices, inflation and other issues, it’s not known if Google will forgo its annual ritual of sharing April Fools’ Day jokes across the company’s pious platforms today for the third year in a row. Most brands gave 2020 a pass but many were back in 2021. Like them, we’re not tone-deaf and insensitive but believe that laughter can be a helpful remedy. Humor can be a great safety valve during these trying times that are showing some signs of improvement. Wireless Estimator hopes that we’ve provided you with a mild smile with our eighth year of celebrating April Fools’ Day. I’m personally appreciative that we have a dedicated audience that is online, offering protection against the unlikely possibility of an inadequately justified life-threatening moral man-slap from Christopher Shelton, Mike Sievert and Dave Mayo.

From monopoles to barber poles, NWSA adds a new certification to buoy lack of broadband funding